Two expert reports on the state of the environment in France were published this July, one by the French National Agency for Health Security Anses (Agence nationale de sécurité sanitaire), the other by the OECD (Organisation for Economic Co-operation and Development).

Both reports make for grim reading.

The French cock, the national emblem, appears on the back cover of the OECD study Environmental Performance Review of France*; it reminds one of the quote by the late, popular, French comedian Coluche who said that the cock is the only bird which can sing with its feet in the shit. (“C’est le seul oiseau qui arrive à chanter les pieds dans la merde.”)

Can France still sing like the cock after this quite damming OECD report, and the one published by Anses ** (whose 1000 pages aren’t easy to wade through)? France’s biodiversity is rich and beautiful, but its environmental practices are damaging to say the least, mostly because they are out of sync with the laws – applications lag behind the law – but also because there are still too few scientific studies on the real dangers of the agricultural substances being used.

Both reports were conveniently published in July, when most of the French are on vacation.  People will thus miss the very important and even alarming messages: the country’s air, soil, and water systems are heavily contaminated with pesticides, nitrates, and other toxic substances – so much so that the health of the general population – and especially that of some one million farmers who work with these substances on a regular basis – is at risk. There is a marked lack of adequate training and prevention measures for farmers using chemical substances, and too few studies and statistics to show the extent to which bad practices, such as mixing different chemicals for spraying, are linked to cancer and other chronic diseases.

The OECD report, available in French only with the English version due out later in the year, is written by a team of international environmental experts based at OECD’s Paris headquarters. It is one of a regular series of OECD Member country environmental reviews (there are 35 Member countries).

Let’s start with the positive elements. The authors agree that France’s green initiatives and strategies for renewable energies have been more dynamic than the French economy in general (which is below the European average).  440.000 jobs comprised the green economy in 2013.  Greenhouse gases have gone down – indeed France’s record here is one of the best in Europe, although it is only thanks to France’s commitment to… an ageing nuclear energy sector.

So things look good – on paper.  French political will exists: a year ago France adopted its Energy Transition Law to encourage green growth; it brokered the Paris Agreement on Climate Change at COP 21 (2015), it fosters laws guided

by the Grenelle Environment (2007-2012); recently it passed the 2016 law on biodiversity with the polluter pays principal.  All this is good.  In theory.

But despite the above, pollution levels remain high.  What’s going on?  Regulations, we’re told, need to be made clearer so they can more easily understood and applied.

According to the report, France’s legislative strategies are too ambitious, so much so that objectives cannot possibly be met.  And the actual management of natural resources and sustainable green activities is in dire need of improvement.  The complexity of the laws are such that environmental players are lost in a forest of rules which need to be simplified; users often don’t know which regulation to go to and so just carry on oblivious of dangers.

Too much intensive agriculture, not enough eco-farming.

France is one of the biggest consumers of agrochemicals/pesticides in the world. And usage is increasing, upsetting the ecosystems, polluting air, soil, and water systems. (See articles on glyphosate and neonicotinoids)

Despite warnings, levels of contamination have changed very little since 2000:  in fact farmers are using even more pesticides than before.  In France from 2008-2014 pesticide use increased 29%.  In the area where I live, for example, some older farmers indeed spurn eco-agriculture, being too used to the chemical option.  Habits die hard.  It is the younger farmers who are ready to change.

Even if sales of agrochemical products have dropped, the report echoes what the French Ministry of Agriculture says, viz. that farmers have been using these products at the same rate over the last few decades, despite new regulations; there has been no tendency to reduce their use.  Where are these farmers getting these products from, if sales have dropped?  Have they been stocking them in anticipation of bans? Are they going abroad for them?  If so why? Perhaps it’s because no feasible alternatives have so far persuaded them to stop using these toxic products, particularly when the big international chemical giants work so hard to convince everyone they are safe …

Water: You can lead a horse to water but you can’t make it drink… The presence of pesticides in the water tables, streams and rivers is “alarming” the report says.  Controls are insufficient.  In some zones pollution is above the European norms for human health safety.

France’s plan Ecophyto, created in 2008 to combat the over-use of pesticides and herbicides such as glyphosate or neonicotinoids, will not reach its goal to reduce by 50% the use of agrochemical products by 2018.  So the time-frame has now had to be extended to 2025.  But is that date even realistic when the tools for applying the law are not being used?

In 2013 over half of surface water in France was in a bad ecological state, with high levels of nitrates and pesticides.  And 36% of that half has not been properly controlled so the chemical make-up is unknown.

Underground water is declared 67% safe, although this is under the 80% norm for Europe.

Herbicides were found in 93% of streams tested in 2011: almost the same reading as in 1990.  And nearly all regions are affected. 18% of sites tested in 2011 had traces of pesticides above the legal norm.  Note that in rural areas connected to small waste water treatment plants – representing 25% of the population – there are no systematic controls.

However, the experts concede that in urban areas things are much better: 91% of water treatment centres complied with European regulations last year.  That said, it is to be noted that in April 2015 the European Commission sent France to the European Court for non-conformity of treatment of urban residual water. – this despite a warning in 2009.

Air: France has been respecting European directives to keep air at human safety levels, and in general air pollution has gone down. But the air is still contaminated.  Control measures, the report says, are insufficient.  The principal polluter is ammonia (NH3, azane) and comes from cattle farming.  NH3 levels dropped only 4% between 2000 and 2013.

The air is also heavily polluted with nitrogen dioxide – traffic pollutants – particularly in urban areas.  In the Île de France region and the southern PACA region, pollution levels are above the European ceiling.  Paris in particular was, in 2014, well above European directive level. Try jogging in Paris?

Whereas the government did try to impose an eco-tax on heavy goods vehicles, the OECD criticizes the fact that the government stepped down in the face of striking truck drivers.  It also criticizes the fact that fiscal advantages are still available for diesel vehicles although diesel has long been recognized as a major air pollutant.  62% of private cars run on diesel, as opposed to 35% en 2000.  The July 2015 Plan to combat air pollution shows political will, but measures need to be enforced.

Biodiversity: France’s biodiversity is one of the richest in Europe, and the country’s commitment in this field is shown through the new biodiversity law voted in just after the OECD report was published. Thanks to investment in conservation and the re-introductions of dying species, vultures are back in the French mountains: the endangered Bearded vulture, related to the Egyptian vulture, now numbers 45 couples in France.

However, not all species of flora and fauna benefit from a preservation programme.  And, the report notes, despite the commitment to biodiversity, land is being nibbled away by the building of new agglomerations and roads which are fast encroaching on an ever-receding landscape.  Increasing volumes of traffic are exacerbating pollution levels;  experts suggest making more use of the railway networks.

France, we are told, is leader in tripling the amount of public aid for biodiversity since 2008. But once again action on the ground has to be taken.  More recycling is needed: composting and municipal waste management is well behind that of Germany or Belgium.  The Polluter Pays Principal is not sufficiently applied; tax on the collection of household waste does not cover the costs of the service; nor do businesses pay enough for the service.

Running out of gas

Renewables: Whereas strategies for renewable energies exist and are to be encouraged, here again the experts say that objectives are not being met (particularly off-shore aeolians and solid biomass).  The aim to bring renewable energy production up to 32% by 2030 is unrealistic and too ambitious given the overly complex authorization processes and the sometimes ‘unstable’ subsidies system which are currently in use. 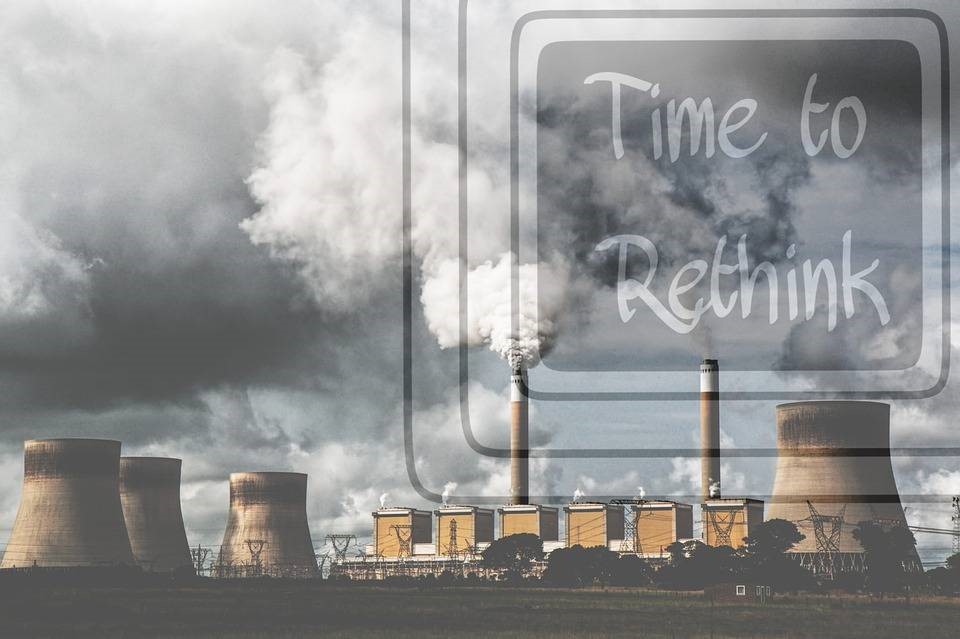 The report calls for a reduction in nuclear energy, an ageing sector, in favour of renewables.  Nuclear  represents 47% of energy in France.

Experts propose 33 Recommendations for France to clean up, among which:

So, dare that cock crow?  Hopefully in the next 20 years he’ll be more justified. 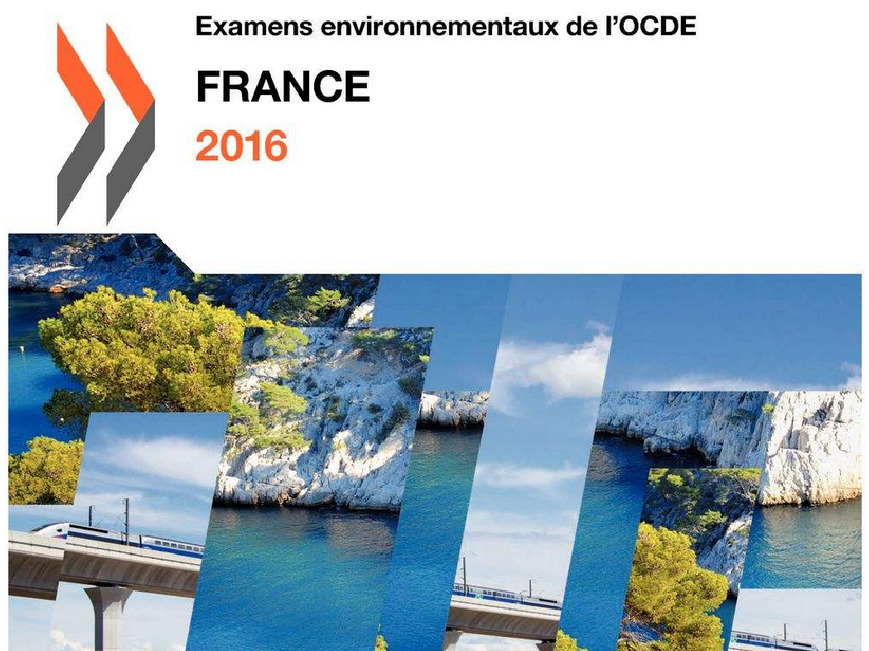 *Highlights in English of the OECD Environmental Performance Review of France can be found here.

A free peek at the OECD Review in French can be found here.

The English version of the OECD Review is due shortly. Check this website.

** The Anses (French National Agency for Health Security) report can be found here.