The small Leper colony in the woods down the hill with its Saint Thomas Chapel dates back to the 12th Century. We have been coming here on our walks for the last 15 years. It is surrounded by a high flint wall now taken over by the rampant vegetation. The leper’s pool, once known for its healing qualities particularly for rickets and malaria, is still there thanks to the ever-reliable Norman rainfalls, its mirror surface reflecting the surrounding beeches, holly and hazelnut trees in a stillness which seems to transfix the place in some kind of limbo – which is exactly the state in which lepers had to live.

We come here to tie knots in the sapling branches of the hazelnut trees, continuing along with others, the centuries’ old tradition of staving off illness and finding good luck.

The Chapelle Saint Thomas is dedicated to Thomas à Becket, Archbishop of Canterbury, born in England of a Norman father (his grandparents were also Normans).  He studied in Paris before returning to England to become the English King’s close friend and Chancellor, then Archbishop.  When he clashed with the King about the Church he fled to France under the protection of the French King Louis VII.

Having studied in Paris and lived both in Paris and Normandy for decades, even if I can’t boast such illustrious connections I feel some affinity with this history, this chapel, and its surroundings.

Back in 2010 when we went down there one summer afternoon, thinking ourselves alone, we found a group of archaeologists scraping out the dust from some skeletons they’d exposed from the earth beside the church. “Look,” the friendly archaeologist called us over, “this is a young mother with her baby child in her arms.” We weren’t sure

whether we wanted to look, yet we’d surely have had no qualms peering down at this poor young woman’s bones and her baby’s through a glass case in some impersonal museum room. It felt like some kind of sacrilege. We felt the place had been spoiled. These skeletons belonged here. Indeed, some say the colony being dug up, studied, labelled and opened for tourists has killed the spirit of the place. But it is hardly visited, and its walls and other vestiges are quickly overgrown by the ferns and moss. And there are still always offerings – often renewed – fixed to the chapel ruin walls or lying in little niches, be they fading flowers, candles, or pieces of cloth tied in a ribbon to thank God for having cured them or a loved one, or to stave off the devil who would make the afflictions worse.

This little colony north of Rouen was founded in 1180, just before Richard the LionHeart, Duke of Normandy and King of England died.  It was the time of the Crusades when leprosy travelled from Europe to the Middle East and back. During this period, where England had a reported 99 leper colonies, France had 2000 – 318 in Normandy alone**. Rouen was the second largest city in France, with many foregin visitors facilitating the spread of the disease.  Our Saint Thomas colony is one of several in the area, including those at the monasteries of Mont aux Malades and the Salle au Puelles, then in the smaller towns of Répainville, Darnétal, Saint-Léger-du-Bourg-Denis, Bois-Guillaume, Saint-Sever, and Sotteville–lès-Rouen.

We’re told 250 people were buried here at the site of the Saint Thomas Chapelle before the site was abandoned in the 16th Century. But at any one time there were under ten residents. And although it’s called a leper colony, it housed other sick people too. Throughout the Medeival period there were cases of much more contagious diseases such as the Plague, tuberculosis, polio, congenital diseases, all of which hit the rich as much as the poor.

The sick lived here in what became a self-contained village with farmyard animals, a plant garden and livestock where the sick had to abide to strict rules both for the body and the soul.  Don’t touch the stream water, collect it in a barrel. Don’t waver from ‘the invalids’ path’ (which still exists) down to the Seine so as not to risk contaminating the population. Your body is dying; take care of your soul which never dies. Plant remedies abounded such as inhalations made of lupin, purslane roots, lily and onion, which softened the skin. Other less appetising treatments were to cut a cross into the leproma and cover it with a poultice of cantharides and realgar (arsenic), or making a cream out of whiting and fat with a dash of quicksilver and sulphur.

Before 1250 leprosy was considered an earthly purgatory and it was only after then that they suffered prejudices from the population who associated them with drunkenness, avarice and lust. If the begging lepers not living in colonies – “lépreux forains” and “lépreux sauvages” – were considered a threat to society, by the early 14th century, even when living in a colony and codified as lépreux, they began to be persecuted.

In 1348 the Black Death invaded Normandy.  Victims arrived in the colony where by now, each one had to go through a codification ceremony, chaging their identity into The Sick. The infrastructure was well organised; rules were similar to those in monasteries with masses and other practices.  Voluntary carers, many of them family members, helped the sick, feeding those unable to feed themselves. It was a kind of mini Social Security system backed up by the Church. Ironically, by now the lepers, in comparison with other sick people, are doing relatively well, living longer than the others; (s)he could hope to live several months if not years while others died rapidly from their more serious afflictions.

By the 14th century things were changing; little by little the colonies were becoming an attractive place for investors… Yes: the colonies also served as old people’s homes. Wealthy people were giving donations to ensure a place or their old age. Thus the colonies – or at least the ideas they suscitated – were the precursor of old peoples’ homes. And, since the healthy were coming in to reside, there was an evolution from the communal way of life to a more individual way. Food was available as well as help; the lack of vitamins was made up for in an abundance of meat  and wine. The herbal gardens helped soothe scars, pains and ailments. 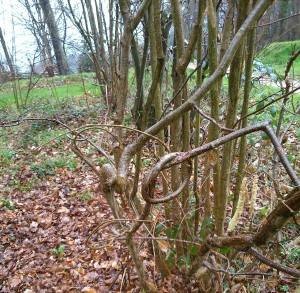 When the sick died, who was going to bury them? No-one wanted to touch the contagious.  Again the buriers, driven by devout Christian values, were voluntary and were prepared to take risks to give the sick holy burials. The Black Death and other contagious diseases thus heralded in the Jesuit order of La Charité, founded by Loyola, an order which is still very much alive today in our Département of the Eure (no less than 120) helping at burials, helping the poor and families of the deceased.

NB:leprosy is far from eradicated in OECD countries.  There are around 2-4 million people with leprosy world-wide according to the French Leprosy Mission.

216,615 new cases of leprosy were diagnosed and treated in 2013 according to the World Health Organization.

There are 2000 cases in France. Most western European countries – sic. France, the UK,  are not regularly submitting figures to the World Health Organisation although there are reported new cases each year. The UK had 19 cases in 2012; the UK Leprosy Mission says there are around 12 new cases each year in the UK.  The United States (who report more regularly to WHO) had a reported 175 new cases in 2014  – mostly male, with a total of 4758 cases during the period 1985 – 2014.

* The paleoepidemiology of leprosy: an overview, by Michel F. Lechat.

2
Share on FacebookShare on TwitterShare on Linkedin
PreviousAn Orthodox Tlingit in Alaska
NextDoctor Who?