The titanic operations to create ‘Grand Paris’ are under way.  From now until 2030, a huge new rail infrastructure around Paris linking the suburbs, together with seven new economic ‘clusters’, will be born – – or rather laboured into a very slow birth. Cost: 3 billion euros.

The idea behind this plan, dreamt up by ex-President Sarkozy and adopted by Parliament in 2010, is to make Paris a rival to London and Berlin;  Le Grand Paris, we are told, will become a dynamic social, urban and economic area unifying the strategic territories of the Ile de France.  Greater Paris will be attractive to live in, better connected, offer more jobs, draw in more people, offer 70.000 new places to live in each year.  Greater Paris aims to have 12 million inhabitants. This is bigger than Greater London (8.539 million in 2014) and Greater Berlin (around 6 million in 2014).  It represents 19% of the French population.

Welcome to the Megacity.  Welcome to money, land sales, building contracts, architects. Welcome to the Bureaux des Travaux Publics – the Public Works Office for the next 10-15 years, which otherwise risked losing its raison d’être now that the three High Speed Train lines carving through France are coming to completion. And welcome to expropriations in the heavily urbanised zones where new train stations are to be built. Major destruction and construction works are already underway for the new 200 kilometre rail network.

Is this new network really needed?  INSEE, the prestigious French National Institute of Statistics and Economics Studies is doubtful: see its analysis of April 2015.

Other skeptics have published a White Paper raising the same questions.  Their team of experts esteems that the Grand Paris plan is based on a fundamental error of judgment: that the present rail infrastructure is saturated and new infrastructures are needed to relieve two of the main RER lines (Réseau Express Régional, the commuter rapid transit rail system serving Paris and its suburbs).  No such thing, the White Paper experts argue, we just need to modernise and re-generate the existing infrastructure with more up-to-date systems, put more trains on the rails to avoid long waiting times, and the RER would have ample capacity to take on present and future demands.

The Société Grand Paris argues that this new Greater Paris will bring jobs.  Indeed yes – for the architects and builders and all those implicated in the construction; but once all is built, what jobs will there be for all those they’ve drawn in to the new Megacity? Will the extra 70 000 households they’ll have hoped to draw in each year (multiply this number by 15 to take us up to the year 2030 which marks the end of the project and you get one million fifty thousand people – will these people just swell the legions of the unemployed?

And is Paris the only place to get work?  What about Lyon, Bordeaux, Lille, to name only a few of the wonderful French towns and cities? Why not help create jobs there rather than bring people all the way to Paris?  Even more importantly, but on another tack: surely the best way to create jobs is not to displace people but to change the labour laws. And mentalities.  While the present legal structure for setting up a business in France discourages many from even attempting it – mostly because of heavy social charges – it is no surprise the French are leaving the country with their expertise to set up abroad in the more pragmatic legal infrastructures offered by the UK, Germany and the US.

The Parisian tax-payer will not be financially implicated directly by Grand Paris; the tax onus will be on businesses.  But high taxes on businesses could break businesses, and that subsequently ricochets onto each and every Parisian.

Even if there have been ongoing Grand Paris information meetings, there seems to have been little choice in the matter for Parisians.  What real and honest opportunities has the Parisian had, or does have, to contest the fundamentals of the project?  In this day of democratic referendums, perhaps it would have been fair to hold a referendum for Parisians to take part in the decision-making which seals their fate and that of their City.

In a time when the desertification of France is reaching crisis point, where working-age people are abandoning the countryside in droves, leaving behind vast expanses of France with no services, the question arises: why not use the near-30 billion euros set aside* for this quasi Napoleonic Grand Paris plan to develop the dying areas of the provinces?  What about a much needed Decentralisation project, instead of this mega-Paris one? Rural France could well do with – and needs – a similarly enormous economic and social plan to allow it to at last rise again from the dead.  Economic activities, jobs, social services – everything is needed in La France Profonde so that no-one would have to flee to the capital for work; no-one would have to worry about dying because of lack of doctors (see Dr. Who?) and hospitals; communities would thrive, and the legendary pessimism of the French could at last be replaced by an overall dynamic enthusiasm and imaginative enterprise which the French in general are so capable of if only they were given the chance.

There are many, and they keep changing.  The most ‘concrete’ of the project so far is the actual digging of tunnels and laying of rail tracks for the transport infrastructure.  Since November last, Magali – a gigantic machine weighing 10.000 tons – is digging a 3.5 km tunnel in Paris between the train station Saint-Lazare and the Mairie de Saint-Ouen. Four new metro lines are to be dug, and two are to be extended. Not to mention all the other lines (see pictures).

The two construction giants Bouygues and Eiffage are in charge of the Saint-Lazare- Defense tunnel, scheduled to start next year.  Pascal Hamet, regional director in charge of these underground tunnels at Eiffage has spoken of the delicate work** digging under the city, taking into account electrical and water networks let alone the geological make-up of the earth in a densely populated area of Paris. The city also has underground quarries: weakening the surface is a serious issue. Such geological complications in digging the 33 kms of tunnels have meant delays.

Work on Grand Paris will take from now until 2030.  It means:

President Nicholas Sarkozy promised during his Presidential term to help rural France and save it from ‘desertification’.  Why then did he propose and support such a leviathan project and thus threaten to drain the heart of France even more?

Perhaps it is a question of leaving one’s mark.  He inherited the French custom of France’s leaders who build on a grandiose scale to the glory of France, La Gloire de la France – as is written on one of the entrances to Louis XIV’s Chateau de Versailles.

Also for their own glory…  Napoleon had the Arc de Triomphe built: just one of the several monuments to celebrate his – sorry, France’s – victories.  Indeed, it sounds Napoleonic when you read of the President of the Society Grand Paris (SGP) referring to a “War Room” which he has created to ensure there are no construction delays for this Grand Plan.  They are in a hurry to build: unlike normal construction sites where one digs first then pours in the concrete then puts down the rails and other systems, they are striving to do all this simultaneously. And, he reassures us, they are doing their utmost to clear out the waste and scrap to avoid any environmental nuisances local people have been worried about, and still are.

The concern about the project Grand Paris is that it is so enormous that it could become the victim of its own metamorphosis.  What if, in the end, it all tanks?  Where will the money go?

There has been talk of predators: expropriations around the new stations no doubt means ousted owners receiving minimal compensation for having their homes destroyed.  New homes, placed conveniently by the brand new stations, will go up in their place at sky high prices, thus dashing any hope of the ordinary person being able to buy them.  Are we really going to want to continue widening the gap between rich and poor?

On a positive tack, perhaps these new rail lines will ease up traffic into and out of Paris which would in turn significantly reduce air pollution.  As for house prices inside Paris walls:  perhaps they would they go up. Good news for owners, but bad news for buyers.  Even if it will take less time for people to get to work aboard the brand new train lines, will there be work to go to if new labour laws are not voted in?

Last but certainly not least, French mentalities, let alone politics, will have to change fundamentally if such a hoped-for Paris Megacity is to rival London, New York, Berlin. 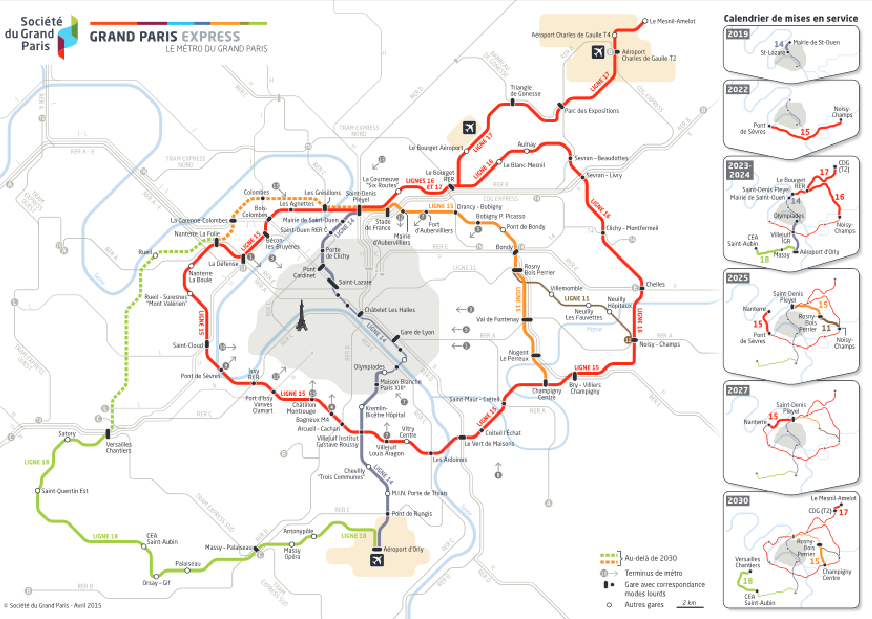 Général de Gaulle  – didn’t need to build monuments: he lay the foundations for the present, 5th, Republic of France

You can visit the Grand Paris exhibition, open until 22 May, at the Espace Landowski, 28, avenue André Moriwet, in Boulogne-Billancourt just outside Paris, on metro line 9.

For details of Grand Paris, see the official website at : https://www.societedugrandparis.fr

*  The initial overall sum for GP was 20.5 billion, but the figure inevitably keeps going up.