After visiting the geothermal glasshouses in Flúðir, Iceland, and hearing about rising electricity costs despite all the waterfalls and geothermal hotspots in the country, we emerged from another soak in the steamy 39°C thermal lagoon and decided to delve further.

According to the International Energy Agency, chart here below, Iceland is 100 per cent self-sufficient in energy thanks to its unique position between the North American and Eurasian tectonic plates, meaning thousands of breathtakingly beautiful waterfalls and sprawling geothermal hot beds which exhale endless veils of mist floating over the basalt mountains and valleys.

Nearly all of Iceland’s electricity and heat are generated from hydro and geothermal.  If you are lucky enough to have a geothermal bed on your own private land in Iceland, it’s yours to do what you want with, but otherwise Icelandic energy is almost 100 percent owned by the Icelandic government and municipalities who lease it out to companies on what the IMF has described as a complicated and confusing allocation basis.

But getting back to our point raised first in my previous article: why, we thought, should electricity costs be high –  as we were told – when it is so plentiful and readily available?

Are the prices really that high? Or are they just perceived locally as being high? Like everything and everywhere else, prices do go up, and inflation has been high in Iceland. But according to a report by the Organisation for Economic Cooperation and Development, Iceland’s electricity prices are, on the contrary, well below the OECD average.  And the IMFagrees.

That said, the projected construction of an undersea cable to Scotland to export excess electricity could lead to higher still electricity prices, for the benefit of electricity generators but certainly not consumers.

We looked further into it: what else, apart from electricity, could be raising the expenses for the greenhouse producers?  Well, subsidies have dropped.  The Icelandic government gives fewer subsidies to horticulturalists than to fish and livestock farmers if we’re to believe OECD’s “Agricultural Policy Monitoring and Evaluation 2015” : they get their figures from the Icelandic government.

Now we were beginning to understand. Horticulturalists find themselves low on the list. That, coupled with policy decisions, particularly on tariffs, hasn’t helped. At the beginning of this 21st century the government lifted tariffs on imported foods – including imported greenhouse crops – in order to keep food prices low for consumers. If this move protected consumers, it failed to protect local Icelandic greenhouse crops. So in 2002 these tariffs were scrapped . Instead, the government increased farming subsidies – this to also help cover increased electricity prices.

But imported foods were still less expensive and horticulturalists couldn’t compete. Many stopped producing. In 2007 another policy move to ease the situation placed a 10% tax on imported fresh vegetables from outside the European Union. (see G.M. Butrico’s Kent State University survey, 2013).

Reflecting these policy changes, according to Butrico, was the decline in the number of greenhouse producers between 1990 and 2008. Nevertheless, tomato and cucumber production grew 66 percent, suggesting that horticultural farms – even if their surface area has only slightly reduced overall – are resilient thanks to their high tech and know-how.

In Flúðir alone we gave up counting the number of greenhouses. And some were obviously very old, and abandoned. The first known greenhouses were built in Iceland in the 1920s. Indeed, it is interesting to step back and take a quick look at the history of food production in general in Iceland: from 9th – 14th century, Iceland was abundant in barley, flax and livestock and thus self-sufficient. But then came the mini Ice Age when the crops suffered. Then Norway colonized the land and opened up trade. Iceland started to import grain and flour since their crops were failing in exchange for their fish and wool. The beginning of dependence. When the country then fell under Danish power, the Danes weren’t interested in their wool and fish and the situation was exacerbated. In the 18th and 19th centuries very cold winters brought more food shortages; volcanic eruptions killed livestock and imported grain from Denmark became infested.  The subsequent famine, disease and poison killed 50 percent of the already very small population.

It was time to return to the self-sufficiency they had once known, the ‘independence’ Laxness was at pains to portray, time to look back to traditional, local food. In the 19th century, farmers turned to mastering the use of naturally heated soil to help extend growing times. Then came the building of greenhouses.

Not only have Iceland’s geothermal resources helped food production, they have given Icelanders over the centuries natural home heating and hot water. In the early 20th century people started harnessing it to heat several homes at a time, and to heat their new greenhouses.   Whereas these efforts were on an individual scale and financed individually, in the1930s the authorities started taking an interest, building such infrastructures on a larger scale.  With dollars coming into Iceland after the World War II, the geothermal district heating system further developed in Reykjavik.

Geothermal production has been growing since 1971, and rocketed as of 2006.

In 1978, the Krafla Geothermal Station was the first to use geothermal for electricity generation alongside hydro.  People were now using the geothermal extremely hot steam to heat up cold water, and by the 1980s Iceland was selling its electricity abroad at competitive prices. Energy intensive industries were booming, and today there are five main geothermal plants in existence, and the Icelandic government owns 97 per cent of them.

The move from oil-based heating to geothermal heating saved Iceland an estimated total of 8.2 billion US dollars from 1970 to 2000 according to the OECD-FAO Agricultural Outlook. And it lowered the release of carbon dioxide emissions by 37%. Iceland’s geothermal and hydro power is now able to support high energy intensive industry, which is thriving and soaring – e.g. aluminium smelting.  No need for oil, no need for coal.

But geothermal is by all means not all clean:  Hydrogen sulfide emissions (H2S) from geothermal plants have doubled.  Let alone the smell, there have been reports of respiratory problems around the Reykjavik area; but monitoring is assiduous and comparatively with other countries, this pollution is under control says the World Health Organisation. And light pollution is another concern as plans for the next generation of geothermal greenhouse (see end of this article).

So why the crash?

It’s no wonder that Iceland is the biggest electricity producer per capita in the world, according to ASKJA Energy. So, with such powerful natural resources at their fingertips, why did Iceland crash so spectacularly in 2008? True, they weren’t alone; Iceland came tumbling down with everyone during the economic crisis, but its banking bubble burst spectacularly. Some said they brought it on themselves with a mixture of cronyism and greed – buying, spending, borrowing. The 2010 film The Future of Hope shows a bankrupted entrepreneur says of the Icelandic crash “we had lost ourselves in greed.”  Halldor Laxness back in 1934 warned:  “If the Icelandic farming community is ever to become anything but the miserable doormat of merchant power, we must take concerted action and rally round the standard of our own financial interests.”  (Independent People).

2008 was a huge reminder of how far Iceland had strayed from its historical identity, and this, coupled with the eruption of Eyjafjallajökull in 2010 disrupting trade and services, shocked all in showing just how fragile the country had become. In 2010, when a Canadian company tried to buy up the Icelandic geothermal energy company H S Orka 2010 (renewablenergyworld.com) there was uproar. A strong opposition movement, started by singer Bjork and backed by parliamentarians, claimed that loss of government control meant loss of identity as well as more vulnerability. As a result, the Canadian company sold back a quarter of HS Orka to Icelandic pension funds. Iceland was getting back on its feet.

The Icelandic people are resilient and they rose to the challenge. “It’s the best thing that could happen to the soul of Iceland,” says the entrepreneur in the film, which shows how Iceland could have a completely sustainable ecosystem.

Indeed, they have risen to the challenge with encouraging results, showing great pragmatism and determination since 2008, a fact backed up by encouraging economic figures (see chart). This was clear to see on the ground as we drove round the island, seeing brand new hotels supporting a growing tourist trade, and giant-size industrial complexes spewing steam through chimneys across huge expanses of volcanic parks.

We also saw it in the proud smiles of Guðjón and Helga as they showed us their fresh, tastyproducts: ‘purely Icelandic,’ they insisted, unpolluted, Icelandic home grown. Iceland is indeed finding its identity again.

Check out the next generation geothermal greenhouse, the first in Iceland with plans to export … to England. 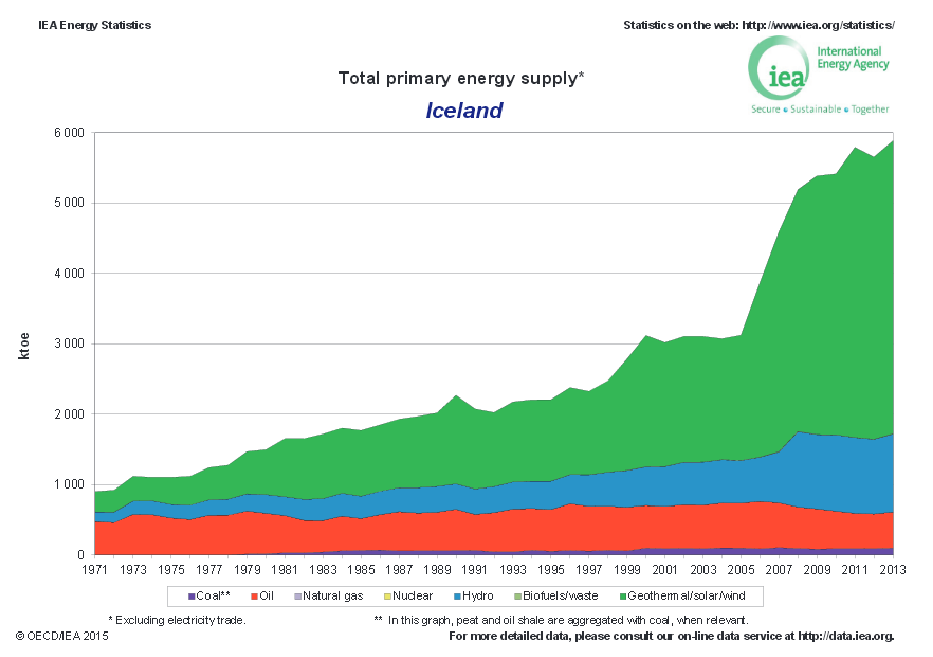 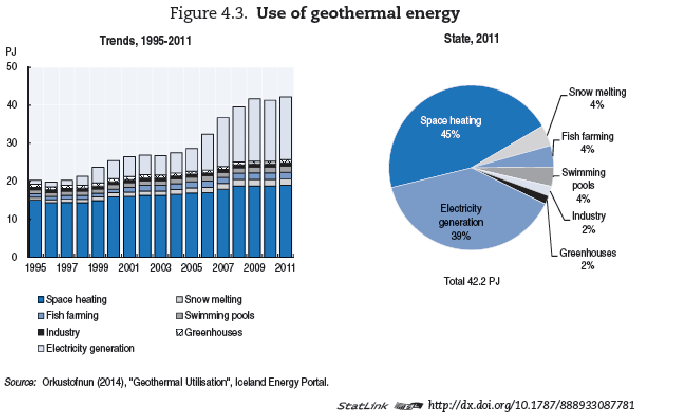