On the barbed wire fence by the farm up the road we counted 120 moles strung up in the sun like socks hung out to dry.  A gruesome encounter.   The local mole catcher had been by. He gets paid per mole, has to prove his catch and he’d clearly earned his day well. Our village of 750 inhabitants sports just one licensed mole catcher, a popular man but for other reasons, too. 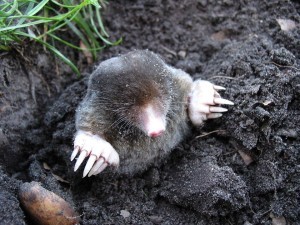 Jean, our able handyman ‘bricoleur’ and devout Christian neighbour over the track went to visit the mole catcher. Jean’s baby was teething: could the mole catcher please give them some moles’ teeth? Not any old mole: it had to be male. He came away with four of them and he and his wife wrapped them up in a little pouch which they put under their son’s pillow. 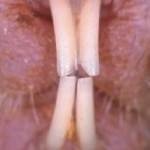 His son never cried again; the teeth grew in healthily, and he’s now a strapping young eighteen year-old with a seductive smile. His mother Sandrine is a good friend. Sharp and upbeat she works hard at the local shop taking care of the accounts.  She tells me this story of the moles’ teeth in passing as if it was totally normal. ‘Of course.’ she says; and even if it was 17 years ago, some young mothers here still turn to the moles’ teeth remedy.

One begins to understand when you consider that while humans only have two generations of teeth, the strong teeth of some mole species perpetually replace themselves.  If that’s difficult to believe, brace yourself – as I did – and check in on this very serious website!

Another treatment for helping a child teething, recorded in 1946 by a local healer, was to hang a little silk sachet round the child’s neck and recite a prayer to Sainte Apolline (patron of dentists), sic: ‘Shayles Feiles; Opmont; Dentante Dentes; Et Doloris; O Deus; Poin Monnable’.

Last year with a raging toothache, a recurring abcess, I needed a dentist urgently and had to beg for a quick rendez-vous which I secured for the following week.  He was 40 kilometres away.  When I arrived he checked my flaming gums and sent me for an X-ray – another 30kms away in Lisieux.  They couldn’t take me, not even in emergency: come back in two days.  I needed this Xray to prove I had an abscess so the other dentist could treat me.  Round and round I went clutching my jaw, with no offer of antibiotics.  I wasn’t so sure about moles teeth, and concluded it was easier to return to Paris – which I did – where, as discussed in ‘Dr Who?, emergency dental treatment is much more accessible.  No wonder alternative tooth remedies have been rife up here.

The focus on teeth in Normandy echoes earlier local superstitions.  René Le Tenneur* lists some of them: don’t throw away your child’s milk teeth because some animal may swallow them and the replacement tooth will take on the shape of that animal’s tooth. If you lose your tooth/teeth, put them in the holy water in Church and you can pick them up on Judgment Day.  In 1945 a baby was seen with a little sachet round its neck; inside was a tooth the local ‘sorcier’ had given the parents to ease the teething.  They tooth came from the local gravedigger…

The idea of transferring tooth pain onto something inanimate is found in another Norman susperstition: take the nail from a horse-shoe and hammer it three times into a tree trunk.  On the first hammering you chant ‘enbornus!’, on the second hammering you chant ‘dognus!’ and on the third ‘diminuet!’.**

Moving on to skin infections.  You’ll remember little Louis (see ‘Dr Who?’) with his affliction. Louis’ great-gandmother Marie told me his story.  Marie is an endearing battleaxe of a woman who runs the farm next door: vociferously.  With her long-suffering husband, François, they have five cows, an apple orchard, a cider press, chickens, a goose and a goat.  They manage to live off their meager pension by growing their own vegetables, eating the chickens and eggs, and herrings – which they pickle – from the annual Lieurey herring festival, washing it all down with their own home

pressed cider and Calva. They speak – or shout – together in a local Patois, and their sprawling family visit each week, the great grandchildren, including Louis, running amok amongst the animals.

Marie tells me the doctor couldn’t cure Louis’ facial herpes. Skin infections are quite common up here.  In fact they have been a common complaint in the region over the centuries if one goes by the list of all the ‘saints guérisseurs’ invoked for skin cures: St. Eloi, St. Guignard, St. Aignan,  St. Marcouf, St Guignolet, Saint Philibert-sur-Risle, Saint Accroupi (for hemmaroids! – accroupi means ‘squat’) to list only a few. So it was merely the continuation – if not slightly modified – of a well-entrenched tradition when they took Louis to the local ‘guérisseur’/healer. Little Louis’ face is now as ripe, shiny and ruddy as the Norman apples amongst which he plays.

Then it was the turn of Marie’s blue-eyed daughter.  She had a severe case of psoriasis and went to visit the same healer.  He washed her hands in clean water, mumbled some prayers making signs of the cross over each of her fingers.  Within two days the affliction had gone.

“Pour moi, je préfère le rebouteur”, Marie tells me about her rheumatism.  A ‘rebouteur’ manipulates joints while he lays on hands.  They are still popular amongst farmers who suffer aches and pains, and because they also cure animals, tracing signs of the cross where the animal is suffering, praying and stroking them.  Marie nods her head emphatically: yes, rebouteurs work.  She remembers one old farmer during the 1970s who’d go from farm to farm curing sick cows, horses and sheep in exchange for whatever the owner could give back in kind: milk, meat, butter, honey.

Whether because of the decline in doctors or the long lasting traditions of saints and ‘guérisseurs’ in Normandy, many in our area are turning their backs on doctors and vets alike in favour of these alternative sources of healing. Paradoxically, while medical science is now capable of performing miracles, the number of healers has started to rise, and not only in Normandy.  Some up here say that it is precisely because doctors openly criticise these healers, calling them wizards/’sorciers’, that the healers have become more popular.

Go figure.  But it’s clear that this trend illustrates a nation-wide tendency. Today there are a reported 5000 – 8000 healers in France for both humans and animals.

Figures have been difficult to come by; even the National Union of ‘Magnétistes’ and alternative practitioners set up in 1997 – with its weird and wonderful acronym GNOMA-SNAMAP – are unable to give me precise figures, but their website helps you locate your nearest ‘specialist’: hypnotists, ‘rebouters’, ‘bruleurs de feu’, ‘magnétiseurs’… the list is as long as the Saints guérisseurs.

Unlike the saints with the Church, these alternative practitioners – even if some of them work with the Church – are not recognized by the French Social Security system.  However, a growing number of hospitals are opening their doors to them.  But it is rare.  Take the case of our local woodcutter.  He owns the woods here and was, until recently, driving tractors up and down our lane every morning, every evening. Then suddenly it stopped.  Neither the generalist nor the psychiatrist were able to diagnose what was causing his depression. But they filled him with debilitating pills and told him not to consult ‘sorciers’.

He did exactly that, and went to the hypnotist.  The hypnotist, being enlightened and spending much more time with him in the consulting room than most generalists have the time for, pointed him to a neurologist.  Why hadn’t the generalist or the psychiatrist suggested this as follow-up?

There is a growing number of Parkinsons cases in rural areas in France, many pointing the finger at farmers who spray dubious insecticides on the surrounding wheat, barley and colza fields.  Knowing this, one would hope doctors and specilaists would be more vigilant referring sick patients to the correct services. 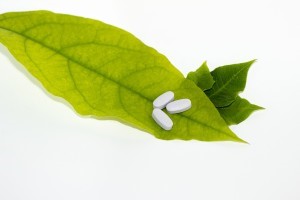 Plant remedies as alternatives to official medicine are still popular.  If the two ladies who owned our house before us were out every day collecting dandelion leaves for the farmer’s caged rabbits (who ended up in the paté pots), they kept back some to mix with sorrel and made soups for anyone who had fevers or indigestion.

Marie tells me that when the whooping cough swept the commune – albeit some decades ago now – they’d cut up turnips and macerate them in in sugared water as a cure. Her mother made a poultice with wheat flour to relieve the farm hands of their back problems.  When her little brother played up. her mother threw him in a bath of lime blossom: that calmed him down.

The pure white petals of France’s national flower, the Lily, are picked when the moon is waning, during the Fête-Dieu (second Sunday after Pentecost).  They are then soaked in Calva to treats open scars and scratches.

The ‘Chêne Cuve’, a unique oak tree with a kind of basin (cuve) formation at its base can be found in the Forêt de Brotonne.  It is the oldest in the Seine-Maritime at 390 years old.  The ‘basin’ is made out of five oak trees which grew in together.

Rain water gathers in this basin, and is very strong in tannin.  The water from this ‘Chêne Cuve basin is still believed to be excellent for curing open scars.

But to return to the moles’ teeth bundle.  Medicine bundles are found all over the world, and Normandy is no exception.  Sandrine’s and Jean’s mole teeth bundle is a clear continuation of an old tradition: Le Tenneur* tells us that the Normans used to make Easter candle way bundles to stave off disease, wrapping it up with a medal of Saint Benoit and small pieces of steel.  Or salt, foxglove ash, and a snippet of umbilical cord…