It was the 4th of July and we were in the Iñupiat town of Kotzebue, the largest community in Northwest Alaska.  Kotzebue is on the Chukchi Sea north of the Bering Sea and opposite Russia, some 50 kilometres north of the Arctic Circle.  Before the Europeans came it was a major Arctic trading port between the Russians and the Iñupiat Eskimos who traded in fur, skins and seal-oil, and later in gold. Trade increased with the arrival of the whale boats and missionaries.

When we landed the day before, the ice-floe was hugging the shoreline; it was freezing cold and we were shivering in our parkas.  Yet within the space of 24 hours, the temperature had rocketed.*

Or rather I should say we were shivering in our ‘anoraks’.  The word derives from the Inuktitut/Inuit “Annuraaq” meaning an article of clothing.  An authentic anorak has no front opening and has to be pulled over the head.   A ‘parka’, as it was originally conceived by the Inuit, is strictly knee length and has a front opening.  The word ‘parka’ originates from Nenets, the language spoken by indigenous people of northern Arctic Russia with whom the Inupiat traded.

We hadn’t planned to be in Kotzebue on Independence Day, it just happened like that.  We’d lost sense of time in this land of round-the-clock sunlight.  But there we were, in the middle of their 4th of July celebrations and notably the Miss Arctic Circle contest where the girls flaunt their beautiful hand-make parkas.  We woke up with the sound of children shouting, dogs barking and the roar of truck engines, so we decided to join the procession, but first took a quick walk down by the seafront.  The ice floe had completely vanished, receding to beyond the horizon.  The sea was a bright blue, sparkling under a gloriously warm sun.  The trucks were rumbling down the village tracks, festooned with flags, ribbons, branches of driftwood, tassels, plastic bags, snow shoes, and young ladies with raven-black hair dressed up in their parkas and waving to the crowd.  We went to join them. The Kotzebue fire engine slid by down the track, with a middle-aged man – the mayor or a local counsellor perhaps, everyone seemed to know him – dressed in a thick white cloak and wielding an elaborate spear at an imaginary polar bear (someone explained to us). Then came a truck carrying a small airplane, the wings spanning the width of the roadway and from which dangled a stuffed figure in a sealskin coat.  We didn’t know what

that meant… Young couples carrying babies wrapped up in synthetic parkas, giggling children and stragglers such as us followed the procession until it came to a stop at the large sports field by the edge of the lagoon where the beauty contest was to take place. 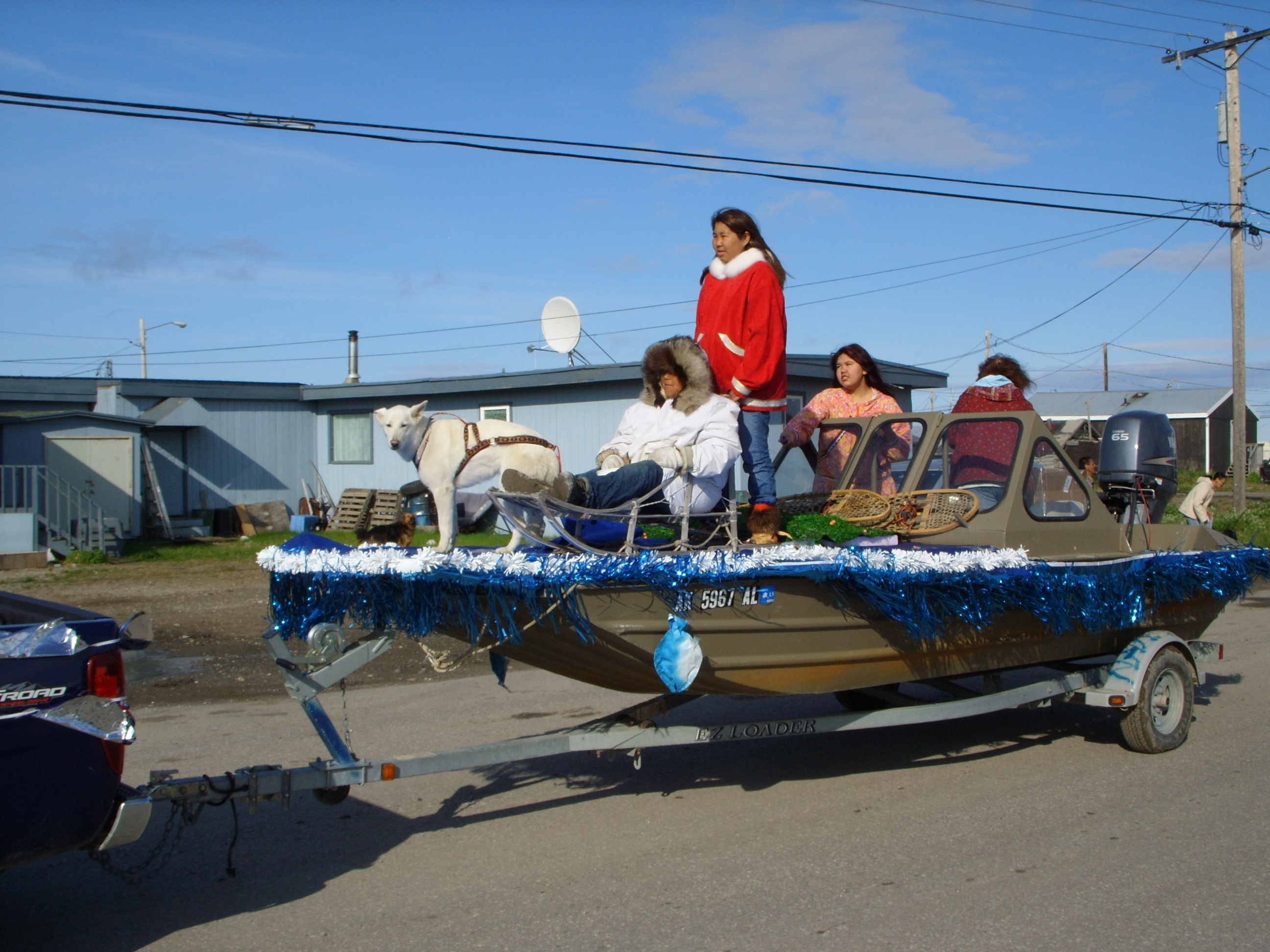 The contest had all the makings of a fashion show.  But it wasn’t, at least not in the European sense of the word.  Far from it.  Woe to anyone who tries in any remote way to copy these parka designs.  (A UK design company did just that and were legally obliged to pull out their clothing, with an apology in November 2015.) Because, we were to learn, each parka has 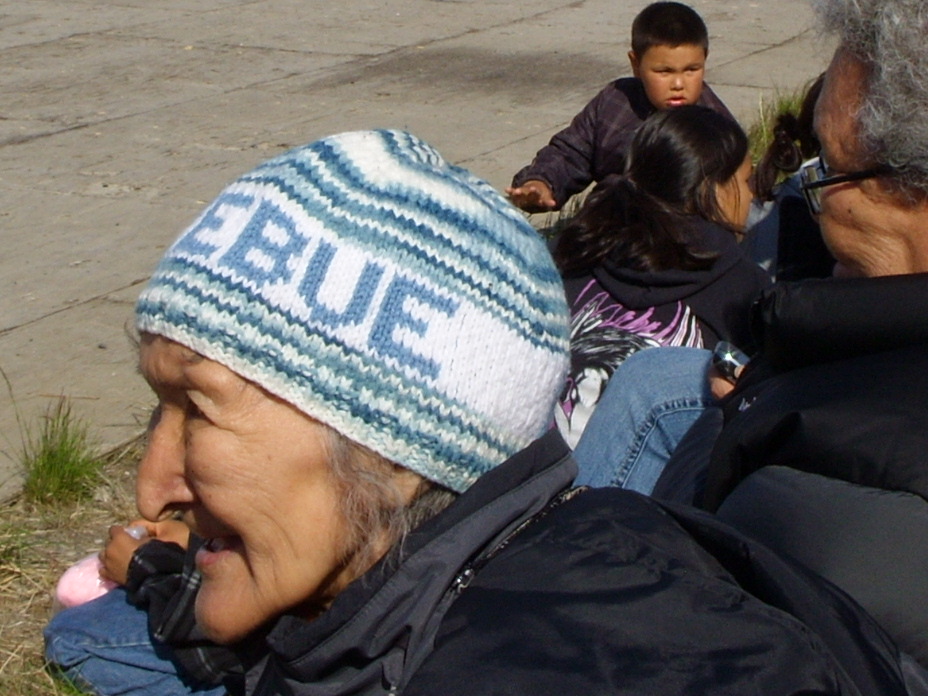 The adjudicator introduced each and every young lady as they walked round the field for the crowd to see, announcing her name, what village she came from in the Arctic Circle, who the able seamstress was – often a grandmother or aunt.

The designs on these parkas reflect a particular historical event in the family’s ancestral history (as with their totem poles), the symbolic pattern normally sewn in on the front, or on the shoulders at the back.  Despite the heat, the girls flaunted their heraldic parkas, proud of the personal stories they were wearing concerning their family as well as of the beautiful work of art on their backs.  This was a ceremonious public showing of historical, family events.  In fact not long ago Inuit girls used to recount these family stories out loud down by the shore to each other.  Then, when they passed the rites into womanhood, they continued telling the stories from the confines of the smoke houses – for a year.  In some Arctic communities, boys weren’t allowed to tell these stories at all since it was believed it would diminish their hunting skills.

Through his loud speaker the adjudicator explained what each parka was made of.  Most were made of sealskin – but some parkas are of caribou hide which is light-weight to wear but warm and durable and rendered waterproof by using strips of sea-mammal intestines.  The parka hoods, which have a pouch underneath to carry a baby, are surrounded by shiny fur of the Arctic fox or the wolverine, fine fur which catches the snow and from which the snow can be easily shaken off.  Inner clothing has the fur facing the skin – (musk ox fur, we were to learn the day later when walking in the mountains, is also extremely heat-inducing if placed directly on the skin against the body).

It was not only the parkas which were on display during this event: one of the girls sported a pair of gloves with a fox head on each one; the gloves were attached to a leather tether strung round her neck.  Boots too – “kamiks” or “mukluks”, were also an integral part of the show, mostly made of seal skin with patterns matching each parka.

It must have been uncomfortably hot under all that animal fur with the temperature outside shooting up to a near 30°C (86°F), but it didn’t seem to bother them as they walked round the field with beaming smiles and while the crowd clapped and waved – at the same time flicking away the insistent mosquitoes.  The very occasional gusts of wind and rush of clouds briefly obscured the scorching sunlight and led to momentary yet huge shifts in temperature with everyone pulling off and on their scarfs and hats and zipping up then unzipping their more ordinary parkas.

When the ceremony was over and Miss Arctic Circle crowned, the field was cleared for the children’s Arctic sports contest. Two young boys in front of us ran forward, threw themselves on the ground and, turning on their stomachs, took a push up position then hopped forward: on their knuckles.  They were having a try at the punishing Knuckle Hop. (See picture).

Others rushed in to join them, many collapsing in a heap of laughter, more coming up, leaping forward from a kneeling position: this was the Kneel Jump.  They didn’t seem to care that most of the families were packing up and leaving in their pick-ups, but boisterously continued in what seemed a disorderly bunch under the eye of the brave adjudicator watching those who were concentrating hard; some were trying the Alaska High Kick, jumping up at a ball dangling from a post, trying to kick it with one foot thrust high in the air

The fun and games over, we finished the afternoon’s excitement with a quiet walk and passed the cemetery.  It is perched on a hill at the edge of the village, above the lagoon and from where we had the only perspective of the town.  Kotzebue is situated on a kind of gravel spit in the Baldwin Peninsular and is the gateway to the Bering Land Bridge National Preserve, the Noatak National Preserve and the Kobuk Valley National Park.  We heard a cracking sound in the undergrowth.  We’d thought we were alone with the wind, wagtails and pipits, but some stranger was wandering around the mounds of earth and gravestones like a ghoul come alive.  We eventually came face to face with a young caribou, coat as if moth-eaten and so unlike the beautiful condition of the coats we’d just seen.  He was molting, wandering amongst the crooked graves which were leaning at various angle because of the melting permafrost beneath.

It was now early evening and we walked back along the shore by the fish camps.  Salmon had been hung out to dry on racks, and gave off an array of almost luminous pink in the curious light.  The remains of a dead bearded seal** lay half eaten at our feet on the beach in a golden sunlight, its entrails sprawling over the gravelly sand like the plaited tresses of some eerie mermaid, reminding me of Sedna, the legendary Inuit sea goddess who takes the form of a seal.

Perhaps pieces of this seal skin would be sewn into another beautiful parka, the entrails used to waterproof a caribou hide.

We strolled back to the village to find the festivities had finished and everyone had gone home.  So it’s goodbye – for a while – to our Arctic girls and their magnificent smiles and beautiful parkas.  They are right to be proud.

*According to Nature, since 1979 there has been an annual 3% decline in the measure of ice in the Arctic regions. This year, 2016, sea ice is particularly scarce, especially in the Bering Sea, as a result of the El Nino effect pumping heat and moisture round the world, and the Arctic Oscillation sending warm air northwards.