A half crazed warrior Thorgeir and his poet brother Thormod were in the Icelandic mountains picking angelica for their soups, salads, and medicinal remedies.  At a place known as Thorgeir’s ledge, near Hornstrandir in the Western Fjords where the plant was particularly abundant, Thorgeir slipped.  His brother didn’t

notice and continued walking further up the mountain.  Thorgeir would have plummeted down a cliff to his death had he not clung onto the angelica with its well anchored roots before his brother turned round and rushed back to save him.

The story comes from the Saga of the Sworn Brothers in 11th century Iceland – the Fóstbrbrœđa Saga.  Indeed, the angelica plant with its strong and rich roots, juicy sweet stalk, and delicious leaves has, over the centuries of famine and sickness in Iceland, been considered a life-saver – along with Icelandic moss.  And it is still consumed today, both as food and medicine.  When sheep graze on angelica its strong aroma permeates the meat, giving it a particular flavour.

Savour it in a sandwich of rye and lichen bread, together with angelica leaves.  Indeed, the leaves are still used to garnish salads, or are cooked like spinach.  It is used to flavor soups and breads, and the sugary stems are served in deserts.

It has also been considered an aphrodisiac, but more of that later.

The first mention of the uses of angelica is found in the Sagas and the Icelandic Grey Goose Laws “Grágás” which pre-date Norwegian rule in 1262.  (The term Grágás “Grey Goose Laws” is said to originate from the fact that the laws were written with a grey goose quill, or that they were bound in goose skin.)  The Grágás laid out punishments for stealing angelica – as they did for stealing moss.  Your wealth– as for Iceland moss – was measured by how much angelica you had on your property.

There is already mention of angelica in a Latin Grammar dating back to the year 1000: it is believed monks who had sailed north learned about it there.  Then, in the 14th century, it was the health benefits of angelica roots which were extolled in the Medical Compendium Alexander Hispanus.  Later, in 1576, the term archangelica appeared in a botanical treatise of Spanish herbalist Matthias de L’Obel. From then on the name archangelica stuck.

In the 1660s the plant was used to treat those afflicted with the Plague.  In fact some say the term archangelica appeared only then when a monk claimed in a dream he’d been ‘visited’ by an Archangel (some same Archangel Michael, others Raphael) who urged him spread the use of angelica as a cure for the Bubonic Plague. The ensuing rush on angelica in Europe has been well documented.

Angelica was, together with Icelandic moss (see Feast and Famine: Icelandic Moss) a life-saver during the Haze famine of the late18th century.  Since grain did not grow easily in Iceland due to the hostile climate, botanists in the 18th century encouraged the cultivation of angelica. Even today, round the ruins of old houses you can still see angelica growing –  I was recently at the top of Grabrok crater, near Borgarnes, looking down on a farm ruin where it was growing in abundance.

What’s in a name

Angelica, with its small greenish domed flower, is indigenous to Iceland and can be found everywhere.  The most nutritious species is angelica archangelica, also known as angelica oficinalis, and is a subspecies of the true angelica.  It should not be confused with the other subspecies angelica litoralis which has a bitter taste and is not considered edible.  Angelica archangelica has twice as much sugar as the wild variety.  Yet it is tough as we have seen with Thorgeir: it survived the Ice Age, survived endless volcanic explosions with its well anchored roods.  It belongs to the family called Apiaceae, the leaf has hollow foot stalks, and the main stalk is a green purplish growing up to two metres.  And it is strongly aromatic.

Eat it, drink it, and be healthy:

Just as for Iceland moss, angelica has been – and still is – a valuable food and health commodity in Iceland, and it has been used as a tincture (yellow).  The soft stems in early summer were eaten fresh, the leaves eaten in salads and sometimes cooked as a vegetable.  When autumn came, the pickers – as with the lichen pickers – climbed the mountains and dug up the roots which they dried and ate either raw with fish and butter, or boiled in milk.  Seeds were dried and eaten.  As a medicament, it was stored in wine and brandy during the 18th century and is still used to make Benedictine, Chartreuse, Vermouth…

Hike, ride, drive or cycle round Iceland –  or just check the map – and count how many places begin with hvanna – or hvönn, the Icelandic name for the plant, showing just how proliferous and strong it is.  (The word takes several variations, but the root of the word, so to speak, can be recognized in this seemingly impenetrable language).  Take for example Hvannadalshnukur (literally ‘the peak of angelica valley) in Vatnajökull National Park;  Hvanngil (Gorge in West Iceland), Hvannstóð (East Iceland), the list goes on…

In for an aphrodisiac? Trust the French

But they are onto something: read another Saga, this time about King Olav, recounted by Snorri Sturluson in the Heimskringla.  King Olav Tryggvasson, who reigned between 995-1000, offers a beautiful bunch of angelica to his queen who rejects it, having hoped for a better gift.  Sturluson tells us that angelica is a symbol of fertility and so, he concludes, the story shows that King Olav’s marriage

is ‘on the rocks’.  It’s worth noting here also that, up until the end of the 19th century, bunches of angelica were a common feature at wedding processions in Voss, Norway  – the influence of Norway in Icelandic history being ever present.

Angelica is considered an anti-bacterial and can treat stomach problems and prevent ulcers. It is also an anti-viral used in the prevention and treatment of respiratory problems.  And is has been claimed to inhibit the growth of cancerous cells.

It also tastes good.  You can add it to other candied peel in your cakes.  As its well-chosen name suggests, it has saved lives over the centuries and still contributes to our well-being in the form of both food and medication: no wonder it is called angelica.

So, if ever you find yourself climbing around the heady cliffs in Iceland with the high winds blowing and the screaming kittiwakes wheeling above you, remember Thorgeir clinging onto the angelica roots which saved him, watch your foothold, stay clear of the edge, get home safe and make yourself some comfort food: angelica stems with rhubarb or apple make a good hearty crumble.  Or for those who don’t have a sweet tooth, wrap your fish in angelica leaves and bake slowly.  Enjoy! 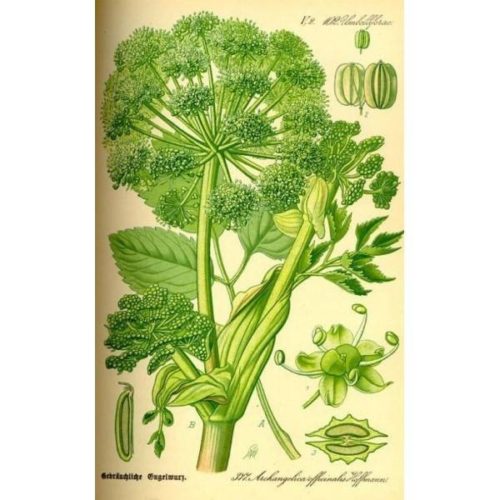