The medical face of France is changing.  General Practitioners are rolling up their stethoscopes. France, known throughout the world for its medical excellence and its highly competent Association Médecins sans Frontières providing altruistic medical emergency response teams throughout the world, is facing an alarming shortage of GPs.

Even if specialist doctors in France are on the rise, the number of generalists is plummeting.  Paris, for example, is emptying out: 2015 saw a 25% drop of GPs per capita according to the Conseil National de l’Ordre des Médecins (CNOM).  The Yonne/ Bourgogne-Franche-Comté too has seen a 25% drop; the Bouches du Rhone is down 17%.

Where are they all going?  They haven’t all retired.  Indeed on the contrary, there has been a marked increase in retired doctors returning to the profession (see chart below).

According to the CNOM (see map) they seem to be moving westwards via Basse Normandie to the west coast of Brittany, southwards to the Pyrenees, eastwards to the Rhone Alpes, and then to Savoie near the Swiss border: these being the only areas showing an increase.

This phenomenon is now becoming quite serious in France.  There has been some political effort to address the situation: the construction of new medical centres, rents taken care of by the state, premiums of up to several thousand euros to help doctors set up – the State has recently announced a lump sum of  50.000 euros for doctors setting up in neglected areas.*

There are vast areas of medical deserts throughout France where, none the less, 2.5 milion people are still living.  The worst-served regions in terms of access to medical care are the Centre, Poitou Charentes, and our region of Haute-Normandie. 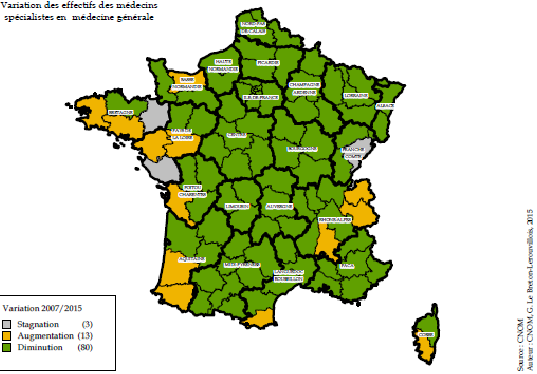 I spoke to my friend’s father, Jacko, about this.  He lives in the neighbouring village.  “Qui veut venir ici après cinq années d’études à Paris, Rouen, Caen?”, he shrugged his shoulders and took another swig of his home-made cider.  Who wants to come back here after five years of study in Paris, Rouen Caen?

Jacko is 78; his village has 400 inhabitants, just 300 people less than ours up the road.  He had a heavy heart operation in Rouen last year after months of his daughter driving him back and forth to a generalist in Rouen – a 40 minute drive –  before he was diagnosed in the nick of time.

If young students leave to go to the capital or big cities to study, Jacko says, they get used to the high-life and ‘sophisticated’ culture there, and never think of returning to the quietness of their home village, or to anywhere outside the big towns.  And, if they are married, their wives want to work; jobs are not easy to come by in the country.

We poured more cider and spoke of the new generalist who has set up in the village over the fields: we were all over

the moon about it when this doctor first arrived, but it took just 2 months for him to be inundated by patients from near and far over the fields.  To such an extent that he will no longer take on any more patients. “Desolé,” he said, throwing up his arms when Jacko’s daughter tried to get an appointment, “I can’t take any more patients.  I’m swamped.”

Nor are GPs easy to find in the big cities up here, either.  Looking at the map of GPs above, can one conclude that rather than face the stress and overcrowding of the capital and the bad weather up north, they are taking off for less polluted climes – notably the westerly sea air, or the fresh Alpine air?

One cannot exaggerate this problem.  Some political action has been taken but more is needed.  Foreign doctors are being recruited, and around 50 pluridisciplinary medical centres were set up in the Centre region in 2015.  These centres offer better working conditions for doctors enabling them to avoid professional exhaustion.  The Health Ministry hopes to set up 1000 such centres by the end of 2017 throughout the aforementioned deserted regions.  It is a start.

And meanwhile, the mayor of a small town in Brittany, desperate to find a generalist for his 1.000 inhabitants, spread the word that he was reduced to recruiting a Druid to do the job.  The news hit the national media, but very soon it came clear it was a hoax for which the mayor took full responsibility, saying he’d done it to draw attention to the crisis of his town – and thousands of towns all over France.

Specialists on the rise.

However, when it comes to specialist doctors, the picture differs entirely.  They, conversely, are on the rise.  There’s been a 6% increase in specialists since 2007 and this figure is expected to rise a further 10 per cent by 2020.

Take a quick look at the map, below, of the overall medical profession in France, specialists and generalists included and it becomes clear that France has been divided into two, North and South, with a clear preference for the southern slice (the Paris region and Alsace being the only exceptions).  The South is by far the better served, the highest density being in the popular and most sought after Provence-Alpes Cote d’Azur.  Again the weather? Should we all move south? 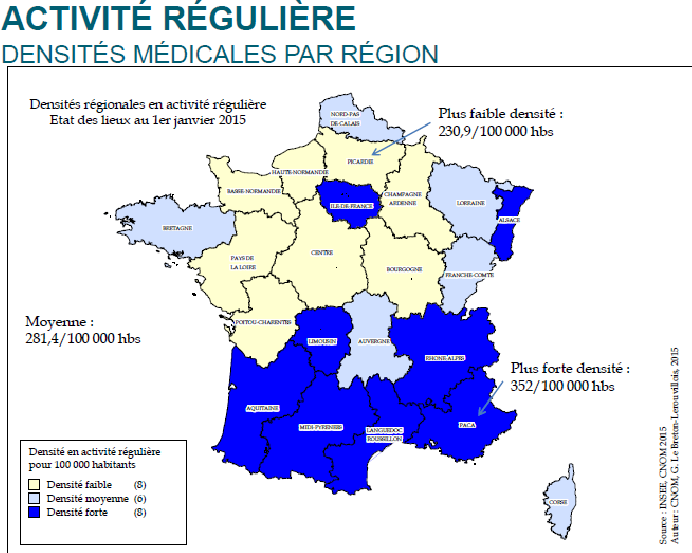 The recorded rise in specialists is thanks in part to a huge increase in retired doctors returning to practice – an over 400% rise from 2007 – 2014. And there are more and more women doctors joining the profession: 58% of women recorded in 2015, against 42% for men.

So: more women, and more elderly doctors: searching out the good weather? It would be interesting to compare this ‘migration’ to general population migration figures, to see whether they correlate.

Delving further into the CNOM report, despite the growing number of specialists, there is still a serious lack of dermatologists, rheumatologists, general surgeons and ENT specialists.

So if generalists are becoming overwhelmed –  when you can find them – who do you turn to if you have ‘flu or need a general check-up? A specialist? And what if you have an ENT ailment, or a skin problem?  In Paris, for example,  I and my friends more often finish up calling the SOS Medicins, the only ones still able to respond within 12 hours and able to refer us to specialists. But what about in the countryside?

Back up here in Normandy, take my neighbour’s great-grandchild Louis.  Louis was prone to severe skin rashes. GPs are inadequately trained in dermatology, and finding a dermatologist up here in the Eure/Normandy is no easy feat. Yet our Department covers 6.040 square kms with a growing population that reached over 610 000 in 2013, and skin complaints here are common.** The Eure has only 19 dermatologists, and their numbers are falling; and throughout France there has been a near 8 % decrease in dermatologists over the last 7 years  – a downward trend expected to continue well into 2020.

Louis’ working mother rubbed all the creams recommended by the pharmacists onto Louis’ little face: zero effect.  They consulted a healer, a ‘guérisseur’ who practises in the local church. At 25 Euros a visit for little Louis, it proved to be worth it. His cheeks are now as smooth and as red as the apples he plays among in autumn – read more on little Louis here.

Healers, ‘magnétiseurs’, ‘sourciers’ – once rife in Normandy in the 17th-19th centuries – were considered evil consorters of the Devil.  But not so now up here, even if charlatans will always exist.  People use them; people trust them.  Here, where GPs, dentists, (just 3 stomatologists in our Department) and dermatologists are so hard to come by, it’s no wonder.  So when Jean, our other neighbour, was worried about his baby son’s teething problems, he turned to the mole catcher…  Read on

Demographic medical Atlas of France, as of 1 January 2015, from the Conseil national de l’Ordre des médécins

**  It has been known that GPs have mistaken cases of leprosy, on the rise in France, for eczema.  See leprosy in France.