Distributors and the agri-food industry have long been accused of taking the lion’s share of the profits from farm produce.  The emphasis of this new initiative is to bring together all actors in the sector in the spirit of transparency and fairness.

The Estates General for Food aims to:

President Macron’s chosen title – Estates General (“Etats généraux”) has its origins in the French Ancien Régime; prior to the French Revolution the Etats généraux was an advisory body to the King, and formed an assembly which included all classes (estates) of people from the entire country. The last time it met was in 1789.

How does the Estates General for Food work?

14 thematic workshops – ‘ateliers’- divided into two sets, are to take place between now and end November. 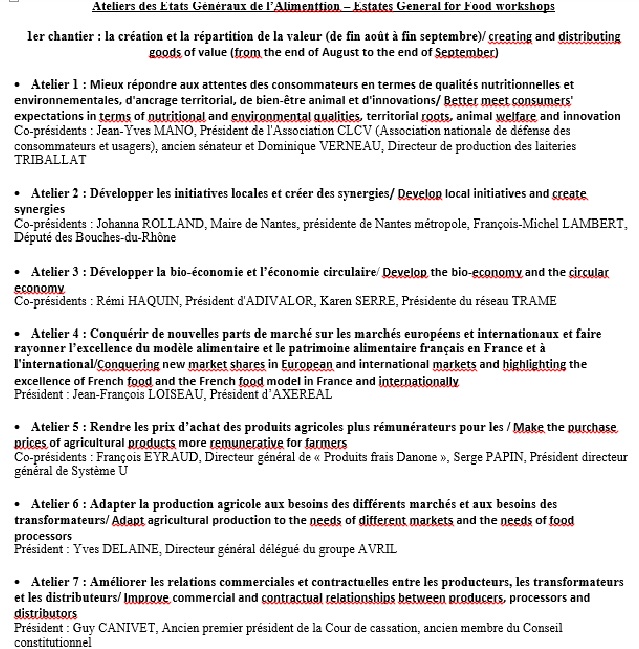 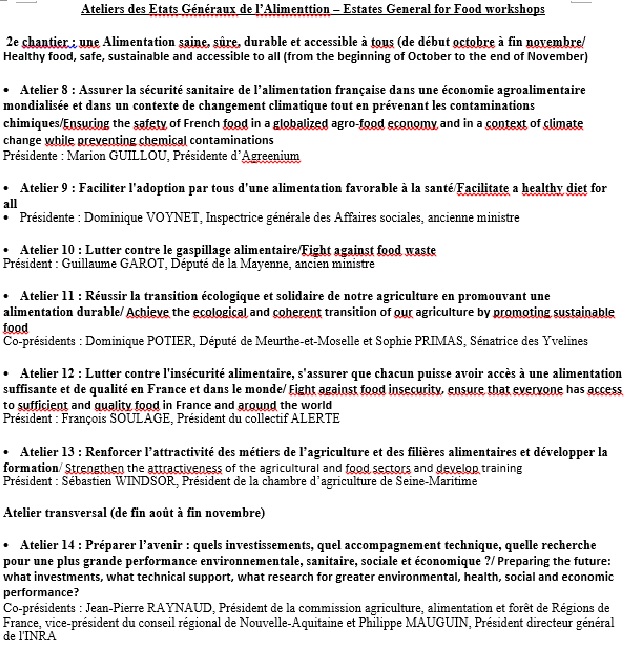 In parallel, a public consultation online is open for all French citizens until 20 October. So far it would seem that those who have participated on this online platform are mostly concerned with farmers’ earnings and support for agricultural transition.

Off to a bad start

The first workshop (confusingly referred to as Workshop No. 5) started on 29 August and tackles the thorny issue of how to help farmers earn a fair living from their produce and live decently from their work.  From the farm to the supermarket the price of agricultural produce rockets and farmers do not benefit from this. However, the choice of the two co-Presidents for this particular Workshop has been unfortunate: neither of them are farmers.  One of them represents agri-industry – he is the Director General for Danone/Produits frais Danone, and the other is the President Director General of Système U, the French retailers’ cooperative.

So it is no surprise that the Farmers’ Unions have expressed their outrage, calling these nominations ‘a new provocation’ and pointing out that these particular co-presidents represent the very people who brought on the catastrophic situation for French farmers in the first place. A quick fix to the problem came in the form of the subsequent nomination of a farmer, Olivier Allain, in the role of ‘General Coordinator of the Estates General’ .  M. Allain is responsible for centralising the results of all the workshops which are scheduled to be finished end October; he is also Vice President of the regional council of Brittany.

Workshop No.1, which started 30 August, covers environment and nutritional standards; Workshop No. 2 started on 29 August and is dealing with local initiatives such as short distribution channels (to avoid high distribution costs);  No.3 tackles the bio-economy, the circular economy, and improving recycling by upgrading organic waste.

Around mid October, President Macron will present the findings of the first set of workshops (Nos. 1-7, see inset above). His Agriculture minister says that the government will be able to take action – based on the findings – by ordinance.

Many have criticised the tight scheduling imposed by  President Macron, and notably his own Minister of Ecology, the charismatic Nicolas Hulot, who publicly announced in June his doubts as to whether it would be possible to discuss and study in-depth all the issues involved in such a short time-span.  But President Macron is sticking to his guns; he plans to start negotiations with distributors and the food industry in autumn, for which he needs facts and answers from the workshops at hand.

The second set of workshops start 3 October and will discuss questions of food quality, sustainability and accessibility for all.

A horizontal workshop from mid-September to end November will discuss how to allocate the 5 billion Euros promised by President Macron over the next five years to modernise agriculture.

The final presentation of the conclusions of all 14 workshops will take place mid-December.

France’s Observatory on Prices and Margins

France’s Observatory on Prices and Margins, whose job it is to ensure transparency of information, is set to keep a close eye on the proceedings of the above workshops.  The Observatory’s President, Philippe Chalmin, says in an interview with La France Agricole of 1 September there is a serious lack of transparency and confidence particularly when it comes to trade relations in France. Statistics, he says, are hard to come by, and the the Observatory lacks funds to keep track of all that is going on; the Observatory only has three people working full time, so their mandate is limited.

Note that in parallel the European Commission invites EU citizens to give ideas on how to improve the food supply chain and make it more equitable.  The EU public consultation website closes on 17 November.