Agricultural land prices in Europe are declining in the UK, France, Slovenia, and Denmark, according to Eurostat’s latest figures*.

The figures are for 2017, and were published end May this year; prices can be compared to previous years’, going back to 2011. Both national and regional figures have been made available by reporting countries on a voluntary basis. 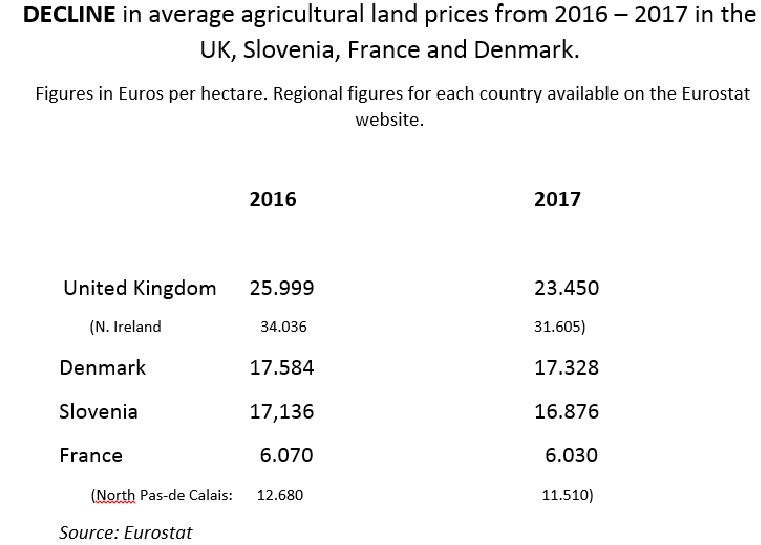 However, prices in The Netherlands and Italy have gone up:

In The Netherlands, land averages at €68.197/ hectare, with the very fertile polder land near Amsterdam fetching up to a staggering €116,069.

More up to date figures – for 2018 –  for  France were were published end May of this year, with a breakdown by French Departments and Commune.  Prices are according to market value fixed by the French Ministry of Agriculture, the SAFER (Société d’aménagement foncier et d’établissement rural) and by Terres d’Europe – the rural land consultancy working with the State.

Whereas land in the Jura fetches a mere €2.350/hectare, land in the North Cambrésis region, where complaints abound of land being nibbled away by commercial zones and other such constructions, fetches the highest price in France at 16.240€/hectare.

Land sealing is pushing up prices, and the French government has set out regulations to curb such development. Its 2016 Biodiversity Law, for example, calls for zero net land sealing development.  However, land sealing still continues in defiance of the law.  A new  Land Sealing Observatory  (Observatoire sur l’artificialisation des sols) has been set up to monitor land sealing and  sanction it – but between the intention and action lies the chasm: check-ups and law enforcement in general in France when it comes to environmental issues are not regular, and are often thwarted by reported favouritism, pots de vins (bribes, pay-offs) and at the best by sloppy controls.

But prices for agricultural land are overall low in France.

How about starting up in France?

Take a look at the website of Terres d’Europe, a rural land consultancy working with the State, which offers precious information  – in English as well as French – on how to go about purchasing farm land in France, and setting up. A word of caution: be prepared for complex administrative procedures when setting up; not only will you’ll need to master the French language, but also the bureaucracy which is famously labyrinthine.  The French have it in their DNA to deal with these convuluted systems, even if it has worn many out.  You’ll be paying more in sweat that in euros.But the result could be worth it.

One quarter of agricultural land in France has disappeared between 2000 and 2016, according to the SAFER.  The reason?  Children are no longer taking over their parents’ farms, something which was par for the course in France until recently.  The younger generation of farmers are taking to smaller holdings and turning to bio-farming which continues to soar in France (see: Bio Boom in France). But still, to date, a quarter of farm managers are now over 60 years old who find it both financially and psychologically difficult to adapt to new farming methods, preferring to stick to the old methods introduced in the aftermath of World War II when mass production was necessary to avoid famine in war-torn Europe.  This, as in the rest of Europe, will soon be a thing of the past, because such methods were dependent on pesticides which have since been proven to be harmful not only for humans and bees, but for biodiversity.

*The latest Eurostat agricultural land prices can be found here.

New figures for the price of land in the French regions are published each year by the French Droit des Finances website here.  However, figures for 2018 have not yet been posted there, so meanwhile visit the above SAFER website (French only).


Share on FacebookShare on TwitterShare on Linkedin
PreviousFood Safety: pesticide residues – or not – in your food?
NextLubrizol. deadly explosion in Rouen