Homepage > News & features > France > Christmas in Normandy, then and now, and The Log

Up here in Normandy, as elsewhere in France, Christmas is for family – the extended family – who bring along and consume together the everlasting Christmas meal, including the traditional Bûche de Noël –  their Christmas cake – which fills the window displays in busy boulangeries.

Not so in previous centuries, where Christmas was much less festive..  More further down.

Today, relieving the host from the burden of cooking for an average of 18-20 people round the table, each family member brings her/his share of the mea .  I watched our neighbour’s family arrive on motorbikes, in vans and cars, laden with bags and coolers.

Sophistication of recipes and dishes available to buy at the butchers and bakers, along with central heating and better living standards since the last century, allow the family  time to enjoy each other’s company, rather than having to hack down and drag in the real Bûche de Noël – the wood for burning – to keep the home warm and the meat cooking.

As for the holy side of things, only a few of the very pretty village churches open up for Mass here, given the dwindling number of priests to officiate.  This year saw 130 priests ordained in France, slightly more than last year, but the number of priests and diocesans in France halved between 1995 and 2015.  There were a reported 29 thousand of them in 1995, but only 15 thousand in 2015. Ten thousand were over the age of 65, seven thousand over the grand old age of 75.

The catholic landscape is not as it used to be in France before the separation of the Church and State in 1905. Churches were the mainstay of the communities, and masses – particularly over Christmas – were held everywhere, attended by everyone. But food was not plentiful; families did not get together.

Thanks to a recent report published by Caen University, we can see how a landlord spent Christmas near Cherbourg in the 1550s.* On Christmas Eve after dinner, his servants drag in the huge Christmas log – la bûche – (a section of a tree trunk) and ceremoniously set it alight.  And then, tout simplement, it is bedtime.  At 2 o’clock in the morning he gets up to go to mass which starts after midnight.  Only when he gets back home will he eat sheep’s foot and drink wine.  Then back to bed.  Meanwhile, in the neighbouring parish, the servants and villagers play morality games throughout the night.  Then at 9 o’clock on Christmas day the landlord returns to church for Christmas mass, after which he just carries on with his everyday tasks.  ANd after lunch it’s vespers.

So what happened to the big feast?  It doesn’t happen.

No-one in those days thought of inviting members of the family nor of offering presents to anyone on Christmas day; and the idea of a Christmas crib didn’t exist.  You couldn’t find a turkey in the farmyard (turkeys were imported from Mexico as of around 1532).  Life continued as usual on Christmas day, sharpening the logging saws, keeping the mill going in sub-zero temperatures to prevent the paddle wheels from freezing.  Servants were sent out to catch small game and, when the weather was good, the landlord went hunting.

Some would go out for a game of ‘choule’, a kind of ball game-cum-fight between two teams of men, often married men against single men, and which often turned violent.  But no-one in those days was bothered about violence on Christmas day.  This game of ‘choule’ is still played today, mostly peacefully, with women participating.  The game originates from the Manche region of Normandy**.

As for ‘Christmas’ presents, they were handed out on 1st January, the landlord offering them to the women, children and staff.  Children went from house to house singing Christmas songs in the hope of getting presents in return.

This is all a far cry from today’s sticky, creamy Christmas Bûche de Noël, from the turkey, the loaded cheese plates and foie gras which adorn the Christmas table, even in modest households up here.   And we’re a long way from ceremoniously burning those Christmas tree-trunks.  With the introduction of stoves such as Godin’s iron stoves – Godin’s Familistère de Guise is just over an hour’s drive from here – and electric heating (introduced 200 years ago), the long tradition of burning la bûche at Christmas has morphed into extended families getting together and consuming food brought in by everyone and having a good time.  Including that cream cake. Cake-makers – pâtissiers – compete with each other for the most imaginative and delicious one.  So I suppose one could say the tradition of consuming la bûche, in whatever way, continues. 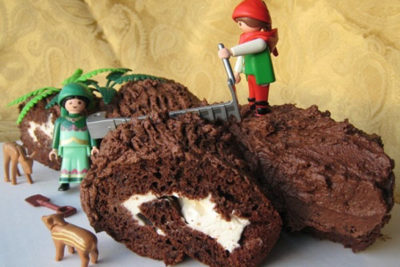 Lighting the Christmas log, the real wood one which was set alight to keep families and servants warm, most probably originates from the pagan rites which took place during the winter solstice when fires were lit.  In Normandy a few hundred years back, and then in some places even more recently, log fires were often lit outside for the poor to come and share the heat; the log – la bûche – was also called the souque, chouquet or chuquet, or the tréfouet– (or tréfeu – a word found in Normandy, Lorraine, Bourgogne and the Bery) which means ‘three fires’, an allusion not only to the Trinity but also to the fact that the log is supposed to burn over the three days of Christmas if not longer, right up to the New Year, or even beyond to the Epiphany on 6 January.

For it to burn so long, the bigger it was, the better.  They’d saw off the thickest part of the tree down towards the roots and called it the Christmas stump, la souche de Noel or the coque de Noel.   It was called the first log, the second, and so on up to the 50th  and beyond – according to how many years the father of the family had presided over the lighting ceremony.  The family and servants first kneel and pray round the cinders kept from the previous Christmas’ log,  then more to the new fire.  The adults hide little surprises for the children at each end of the log.  On Christmas night it was believed that Jesus came and slipped little presents into all the clogs.  Clogs were called Chabots in Norman dialect (sabots in French) and Jesus’ presents, called chabotées, consisted of apples, oranges and baby comforters.

Sometimes the poor would gather round the log fire before going to midnight mass.  The poor and the clergy were often offered logs as presents at Christmas.

The way the log burned, either slowly, surely, or spitting, was up for interpretation; it announced what the New Year would bring.  A fruit tree log was believed to ensure a good harvest of fruit in the coming year; the smell of the wood had its importance – apple wood, abundant in Normandy, renders a sweet odour when burning.  The tree had to be cut down before sunrise and the log was sometimes decorated with leaves and ribbons.  Cinders from the log fire were kept to protect the house from lightening and protect sick people from disease.

During midnight mass, it was believed, all animals kneeled down.  But, as the superstition went, keep away from them, because the animals will turn on you.  It was also believed that bread blessed on Christmas night protects you from rabid dogs, although if you give some of it to a dog he’ll actually catch rabies…***

It was on Christmas day 1066 when William the Conqueror, Duke of Normandy, was crowned King of England in Westminster Abbey.  The English and French who were present cheered the new King so loudly that the clamour alarmed the French soldiers waiting outside who, exhausted after combatting the English, panicked and set fire to houses around the abbey. Witness reports say that only a few – terrified – people, bishops and clergymen and a petrified William the Conqueror, were left in the abbey where William nevertheless managed to make his speech for peace, justice and Christianity in a halting Anglo Saxon he hardly understood himself.  He was then duly crowned in an almost empty Abbey while outside the riots raged.  Not much of a Christmas day…

Here is a Christmas poem in Norman patois.  In our region the patois is called cauchois and it is still spoken today.  When my elderly neighbour gets carried away telling stories in this almost lisping dialect I have to keep asking her what some of the words mean.  This Norman Christmas poem is about the Nativity.  Those of you who have a certain mastery of French may be able to decipher the meaning if you can get your head round the patois pronunciations.

It was a Norman Jesuit missionary, Jean de Brébeuf, who composed a Christmas song for the Hurons in Canada in the year 1641.

Jesous ahatonnia (Jésus est né; Jesus is born) was written in the Huron language Wendat and is the oldest sacred music Christmas song in Canada.  It is still sung today.   You can listen to it here
, and follow the words – below is the first stanza in Wendat, then in French: 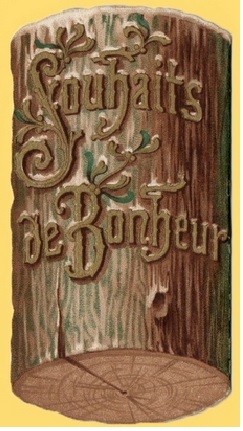 ** Today choule is still played in the North of France.  See: http://www.jeuxpicards.org/choulemahon.html

****Cauchois originates from the Pays de Caux in the Seine Maritime Département of Normandy.

The Association La Chouque here in Normandy meets regularly to speak the language together and keep it alive.

A Norman patois dictionary can be consulted online here:

A book written in the local Norman patois of the region around Pont Audemer, in the Eure, can be found here.

Thanks to histoirenormande.fr for a wealth of information on historical Normandy.

Share on FacebookShare on TwitterShare on Linkedin
PreviousHerd mentality: in the moo(d) for love
NextHappy New Year. The Robin