Homepage > News & features > France > Raise your own: beekeeping in France

How about raising your own bees.  France actively encourages it.  Our local hippy bio farmer lives amidst his various bio crops at the edge of the village.  When I went to pick up my weekly basket of his latest fruit and veg he said he was looking for a beekeeper to put some hives at the end of his field by the trees.  He cultivates strips of artichokes, strawberries, potatoes, beans, raspberries, lettuces, various species of cabbages, and more, depending on the season, using the Living Soil method (Sol Vivant) and wants his crops pollinated. He is also very fond of honey.

The French Ministry of Agriculture last week published a news release recommending newly updated methods to develop biodiversity, including advice for amateur beekeepers and new ways of improving beekeeping skills.  The French sustainable bee-keeping plan, set up in 2013, has been extended through 2017.

Within this initiative, a list of plants attractive to bees and pollinators (plants which produce substances that can be collected by insects and turned into honey are called ‘melliferous’) has been drawn up by the Institut de l’abeille (Itsap), FranceAgri Mer, the Institut national de la recherche agronomique (Inra) and the Société Nationale de l’Horticulture Française (SNHF) ; this list will be used within the framework of France’s Agro-Ecological Plan.  When it comes to bees, the Plan aims to:

Two hundred ‘bee schools’ (‘ruchers écoles’) around France, managed by the French Agriculture Ministry, Itsap and FranceAgriMer, are set to offer training courses for those wishing to become either amateur or professional

bee-keepers, with parallel courses on developments in the bee-keeping industry.  More in-depth courses on innovative methods will be available for those already working professionally in the sector.  Specialized certificates will be introduced as of September 2017: an “Apiculture” (Beekeeping) certificate (600 hours of training); a “certi-api” will be formalized for amateur beekeepers (60 hours of training).

France’s outgoing government has been determined to streamline efforts to improve bee health.  The Minister for agriculture emphasizes the need for an empirical strategy where all sectors should be involved – agriculture, environment, economy, farming and more – to valorize to the maximum all products involved.

Help the bees get through winter

Studies on an international level are ongoing to understand and solve the problem of winter losses.  A “Monitoring” study group of the international network Coloss Honey Bee Research Association has published figures showing where and why winter losses are happening.  29 countries participated in 2015-2016.  They found that more winter losses occur in small colonies as opposed to middle-sized and large ones.  Most deaths were due to

More participation in the annual monitoring project is encouraged (only 1% of French beekeepers participated in the latest one, via the Itsap Instiutut de l’Abeille).  Preliminary results of the 2015/2016 winter research by Coloss can be found here.

The Itsap Instiutut de l’Abeille published last month an in-depth specialist review /field study on the optimum environments prior to winter for bee health in order to improved survival rates through winter.  This serious review was carried out over a two year period in the Beauce Plaine – France’s wheat-bowl south of Paris.  Climate, geographical positioning, winds and other environmental factors were taken into consideration.  They were able to actually pinpoint the one day which was the optimum time for bees to collect the best pollen, and thus could calculate when exactly (in October) to make available melliferous inter-culture cover crops such as clover and mustard before the onset of winter.  (Cover crops are planted to keep soil from eroding, to stop nutrients from leaching, and to prevent weeds taking over, as during the winter). With such melliferous cover crops the bees would be well fed to brave the ravages of winter and disease.

Bee wise: old honey bees do not lose their senses

As an aside,it is interesting to note that the honey bee is emerging as a novel model organism for age-related changes in brain function. A study on winter bees published in 2010 by Frontiers in Behavioral Neuroscience Experts concludes that old bees do not necessarily lose their memory; extremely old, winter bees could still smell, feel and touch, which is in sharp contrast to many vertebrates and some other insect species.  Thus the honey bee has the potential of serving as a new model organism for studying mechanisms preventing the ageing brain from senility, ‘cognitive senescence’. 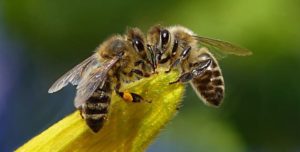 Perhaps we should all be paying more attention to bees…

See also : To Bee or Not to Bee