I took a walk down the lane yesterday.  On the right is the field with the brown cows, calves, and Mr. Big Bull with the ring in his nose (check him out on my kilometre walk during lockdown, he’s quite a beast).  Further down, on the left is the field with the black and white heifers – Holsteins, the ones my horse doesn’t like, the ones which give the best milk.  They’re nervous; and either jump with fright when you take them by surprise, or come gambling up to you, too nosey. The ones up here at the moment are about 5 or 6 months old although, like all of us, they come in different sizes.

As I came to the level of the hawthorn tree which forms part of the hedge closing them in, I found two of them as if hiding together under the branches.   At first it looked like mother and baby; one was much bigger than the other.  Nice scene: babe sucking mother’s udders.  But then I did a double take.  In fact it was the other way round: it was the big one which I’d assumed was the Mum, sucking the little one’s tits. The world upside-down! Or so I thought:  I have no photograph of it, was too stunned, staring at what was going on and, rather than being nervous, the big one just continued sucking and the little one let her do it.  It seemed a pretty intimate moment and made me feel I shouldn’t be there.

Back at home I looked it up on the web: intimate?  Forget it.  They don’t care.  This is quite common amongst cows.  Wait for this: it’s called cross-sucking.  I asked a couple of farmers round here.  You get cows doing all sorts of things, bad stuff, they said, ruins the udders. Cows sucking others. Why do they do it? Mineral deficiency?  Weaned too early?  Or just: well, they enjoy doing it.  It becomes a habit and sometimes the only way to stop them it to separate them in different fields.

Stop them?  Why?  The argument goes that if cows (who’ve had babies and can therefore produce milk) suck each other, they’re taking the milk away from us humans to… exploit. 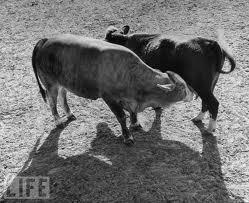 Do we really need all that milk?  Figures show that, in fact we’re all drinking less milk, even here in France where we consume the most butter and cheese than any other country in the world.  How about Africa? European milk pouring into that continent has had disastrous effects for local herders and farmers who can’t compete.  And the Chinese?  Milk from Normandy transformed into powder is prized by the Chinese ever since their 2008 contaminated milk scandal.  Just up the road the milk factory Isigny Sainte Mere has had to expand in response to growing demand from China; it provides up to 30 000 tonnes per year to its Chinese partner Biostime Pharma.  That’s big industry for up here, bringing in 119 million euros per year which represents 50 per cent of its total turnover.

Back to the suckers:  farmers have devised ways to stop them doing it.  You can get contraptions to fix on the udders of the ‘sucked’ one so the ‘sucker’ can’t get her mouth or tongue round the teats.  Or, you can get other contraptions to put through the ‘suckers’ nose to prevent it from getting at the teats of its friend.

I’ve been walking past herds of cows for twenty years but this is the first time I’ve seen such behaviour.  But it is quite common. As are the ‘remedies’.  You only have to do a search on Google to find you can buy these suck-preventing contraptions on the web, or even from Walmart. However, a Canadian academic study on the problem says that such sucking doesn’t necessarily ruin the udders, or give mastitis – which is one of the main reasons given for trying to get them to stop the habit.

So go for it, suckers.  And as for us, let the animals be free to enjoy themselves. It bothers me to see all those metal things stopping them from doing what they so need to do, and enjoy it.  If we’ve weaned them too early then it’s our fault, not theirs.

So, if you see a bull with a ring in his nose, check twice: it might not be a bull but a cross sucker cow.  Some of these cows are crafty: they learn how to manoeuvre their mouths and tongues round these man-made snout contraptions to get to their sucking mate’s tits.  Good for them!

Other behaviour one can see frequently in the fields: a cow – female – climbing on the back of another female as if to copulate.  Bullocks do the same amongst themselves in the fields.  Take a look at the variety out there; think about the notion of what is natural.

There’s a whole Norman patois for all these cows and bullocks frolicking around in the fields having fun. The local patois here is cauchois; some Normans– mostly those over 60 – still throw in a few words here and there.  Ah, those vaks and vyos (cows and heifers) who triyo (suckle)on each other, and the torelyer nympho who climbs up on her friend, not to speak of the robinyer cow who behaves like a bull by running amok and goes screwing – who pren a beza.  They’re all having fun out there in the trémane (clover) and fyat (cow pats).

Some cows, however, aren’t that partial to having sex; folklore has it that to get a cow randy you give it seven slugs in a red cabbage leaf.  And for that cow who has the habit of pren a beza? Shave the hair between her horns on 31st December and she’ll soon stop the habit. And, if your calf has indigestion, keep a prayer in a box in its shelter – in its yat – to stave off the illness.  Otherwise, go and pee in each of the four corners of your field and say a prayer at the same time. 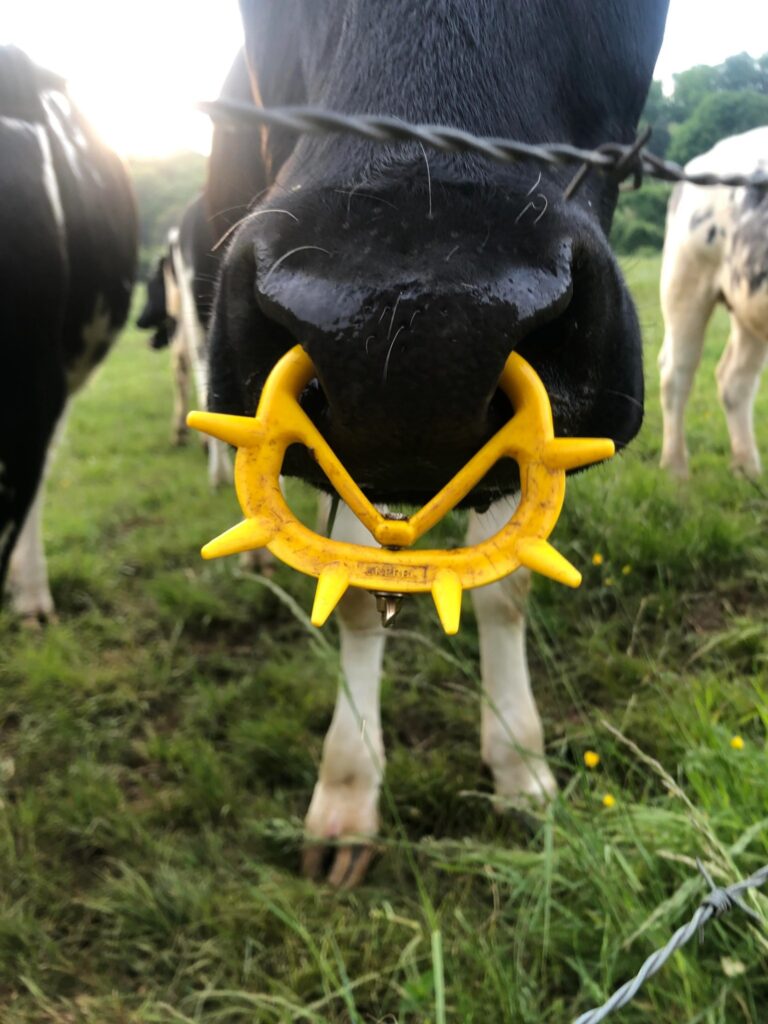 1
Share on FacebookShare on TwitterShare on Linkedin
PreviousMan and Mule
NextChristmas in Normandy, then and now, and The Log