In fact it’s the same kilometre, Covid19 oblige, one month on from the last post.  Trying to make the most of it, hope this cheers people up who are stuck in a small apartment in a city.

The broom has now burst into a brilliant yellow.

Further up our path into a little track gorse bushes too are blooming near our water station. 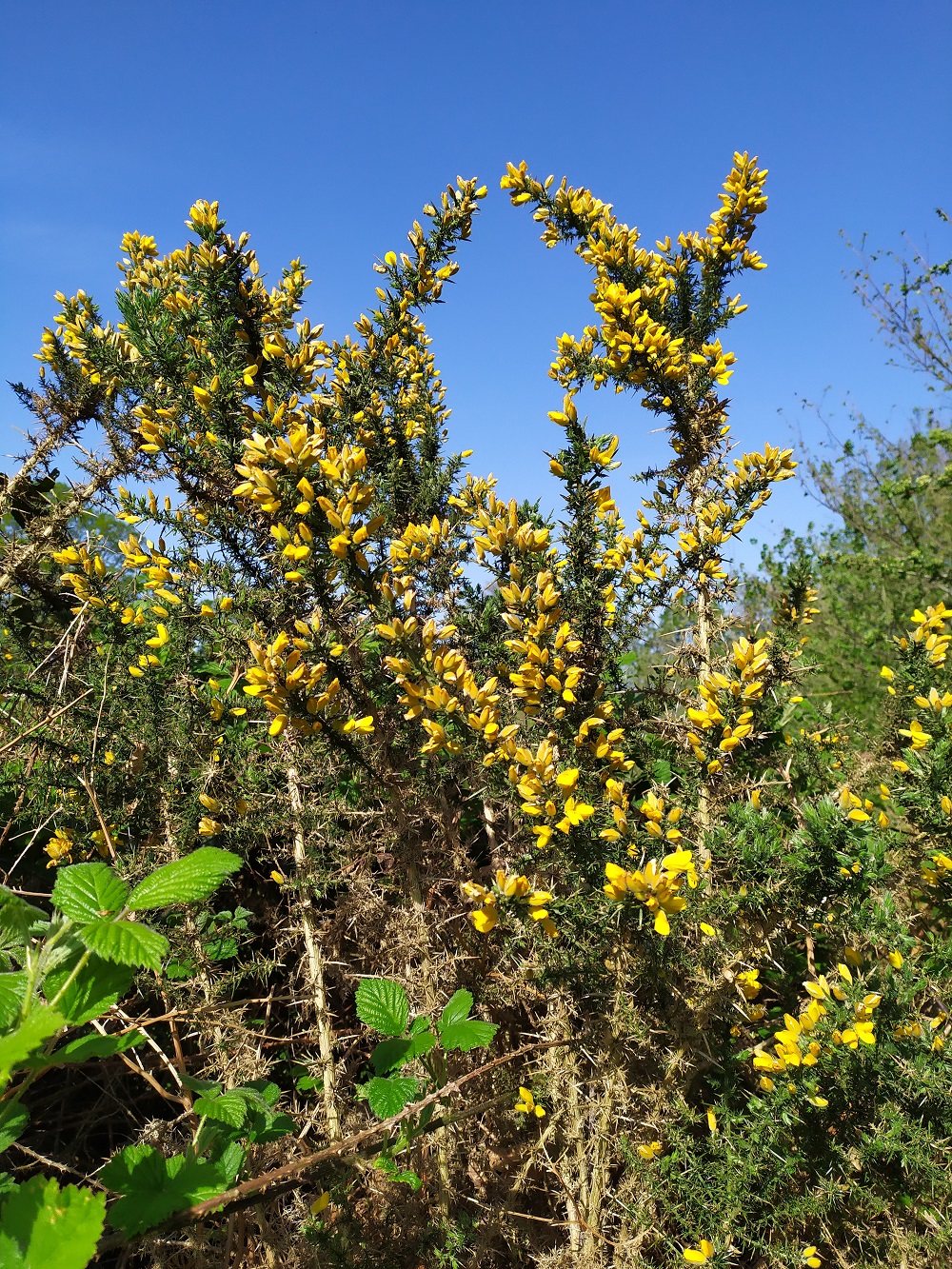 Gorse is often confused with broom, to which it is closely related, but is very thorny and grows in thick bushes where birds like to nest. It particularly attracts warblers.  It is used in Bach Flower remedies.

Hawthorn bush in full flower on the edge of a field – also known as the May Tree:

To be compared with David Hockney’s topiary hawthorn, inspired by the less unruly English countryside where he once lived.  He now lives here in Normandy.

The cows are out in the fields.

Walking the other way, our village farm breeds the Normandy cow – ‘la Normande’ which gives very rich milk and butter.

Their coat has brown and white patches.  They are a less nervous breed than the black and white Holstein who are also renowned for their milk. Farmers in Normandy who own other breeds are encouraged to include at least one Normande into their herd, and receive a financial bonus for each one.

Flax field: three weeks ago the seeds were bedded; the field up the road was like this

We have e a lot of butterflies fluttering around. A Peacock butterfly.

In the woods behind our track, the birds sing very loudly – perhaps the wood’s echo helps. Chiff-chaffs, chaffinches,tits, jays and the occasional mew of a buzzard.  And then another weird sound which sounded like my grandfather’s old bones pinging.  Non-plussed, I looked up and realized it was the branches of two young oaks rubbing together in the breeze – very eerie; it echoed through the wood.

Here’s some young Wild Solomon’s Seal – you can see the flowers dangling here from the stalk, not quite out yet.

Meanwhile the woodpeckers are screaming around , many more this year, and swallows wheeling around in and out of the barn where they’ve been nesting for over 20 years.

We have to sign an official paper each time we go out saying why, when and where, giving all the details.  Police checks, even up here in the country, are regular; they drive round the country lanes but are pleasant in manner when controlling.  This is not a new idea President Macron has imposed.  Take a look at this ‘attestation’ which people had to fill in, dating back to 1720 during the outbreak of  the Plague, la Peste, in Marseilles. 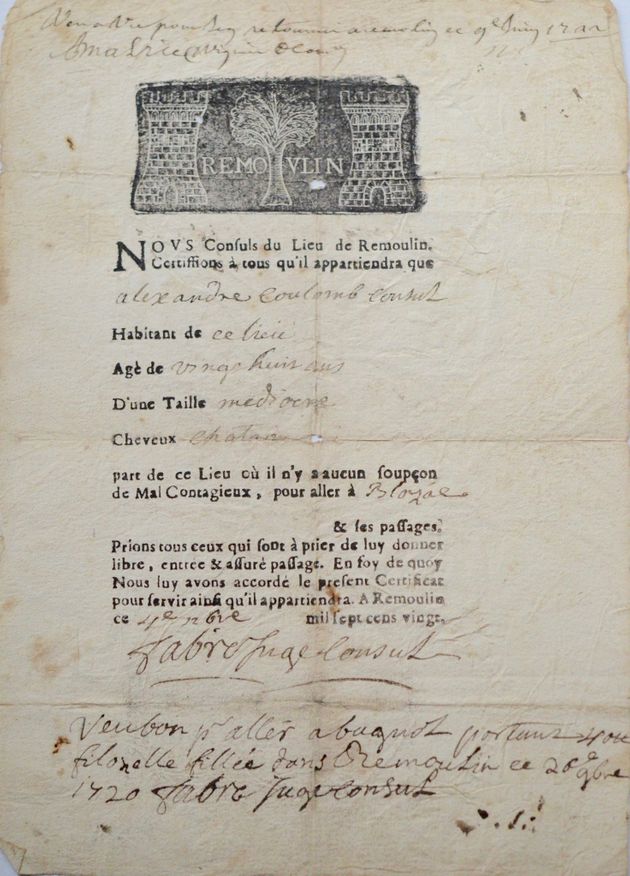 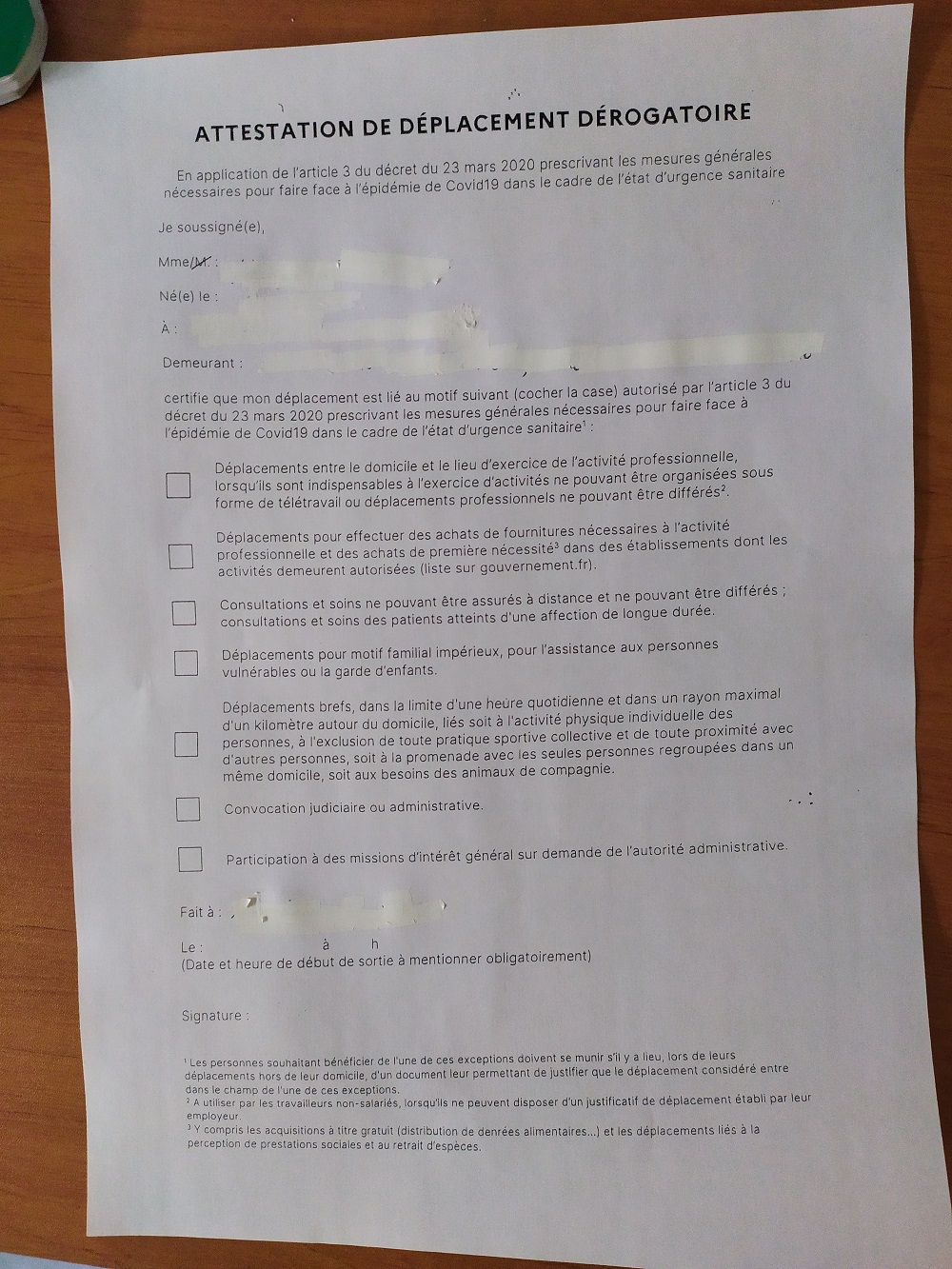 Share on FacebookShare on TwitterShare on Linkedin
PreviousMy kilometre: the hidden riches of a small patch
NextMan and Mule