Sister Superior has a beauty spot on her upper lip which she sometimes licks or even sucks so that when she’s finished and lets it go there’s a smacking sound.  She does it on purpose, I’m sure.  I like the smacking sound, too – and I wish I had a beauty spot like that.

Sister Superior walks down Moonhill, head high.  She walks on air with a radiant smile, that same smile when we sing the Hail Mary in chapel. We all love her, particularly when she swings the myrrh and incense by the altar, lets us pull the Angelus bell, and when she tells us the story of Adam and Eve – with a difference, or at least different from what we’re told by the other nuns.

Sister Superior helps us with our seedlings in class: we’ve put them in cotton wool and jam jars; the radishes and peas haven’t yet taken, but our bean shoots are already quite tall.  This morning she brings in some sticks she’s cut from the branches outside in the playground.  “Here, let’s give them tutors,” she says, helping us fix them.

“So then you’re our tutor,” I say.  Sister Superior beams at me.

“Who’s yours?” Brenda asks her.

“The Man up there, He’s my tutor,” she points to the sky.

She’s the only nun we can speak to like this, the only one with a sense of fun, lifting her black robe up to above her ankles to run with us when we play hide-and-seek.  Unlike Sister Monica.

But back to Sister Superior and our bean shoots.  “What’s for pudding today?” I ask her.

“Oh no, Blanc Mange!” everyone groans.

Lunch time arrives. We’re seated in rows in the canteen with the pink and red walls.  Peas and fish-fingers aren’t the same without Sister Superior dishing them out for us with her breathy smile and her ‘here girls!’ passing the plates along.  Sister Monica is there and we don’t care.  We’re very noisy. “Hey, pass the salt.”  “Blanc Mange – Ugh!”  “Look how it wobbles.” I put some in my spoon and flick it on the wall where it sticks for a second on the line where the red paint meets the pink.  We squeal with laughter.  Suddenly the bell is ringing and Sister Monica is swinging the hand bell.  “Girls!  Behave!  Girls, be quiet!  Girls: silence!” her face red as the walls and the ball of the bell flies off its hinges up in the air, falls with a thud into the Blanc Mange bowl.  We daren’t laugh. Sister Monica is now in hell and ready to charge.  It’ me she’s after.  She grabs my shoulder and pulls me off the bench. “ You!  Get back to the classroom.”

On my way out I think I see Sister Superior down the corridor.  I run up, but she’s vanished towards the Headmistress’ office.  I see she’s dropped something.  I pick it up.  It’s the Book of Common Prayer and I slip it into my pocket to give back to her when I next see her.

After school Sister Superior walks down Moonhill.  She leaves a full path of light in her wake wherever she goes.  And today someone is walking in that path of light, behind her.  A soldier.   Her black robes are flying out behind her like a cloud and she switches her head to check he’s still there and the white band across her foreheadflashes in the sunlight.  She continues, and he’s taking her same stride behind.  He’s in his dapper uniform: khaki trousers and jacket full of pockets, the dark beret perched on the crew cut.   Like the soldier he is, he’s keeping up her rhythm, watching her feet.

Behind them comes Sister Monica, mouthing her prayers under her breath.

My friends and I are in the churchyard.  Sister Superior is coming near.  I stay under the church porch while they set up a picnic round the tombstones.  She breezes past me without seeing me.  “Hello girls!” she calls to my friends, hesitating for a second, licking her beauty spot.  They look up and smile because she’s always so fresh.  She walks over the daisiesin the other direction,  towards the dark yew.  It is a huge tree, the trunk almost the width of the church doors.  It stands by the older, leaning grave stones.  And he is there too, hesistating.  He smiles at my friends, then when they busy themselves opening the picnic I see him turn.   He saunters over to the tombstone of Mary Forthright, wife of William, tallow maker from London, died 1812 – the slab is cracked and lies flat on the grass and has on occasion been our other picnic table.  Sister Superior who has now vanished under the yew.  I fancy I can see her light coming through the branches. 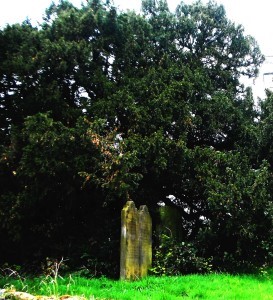 The soldier who hasn’t seen me thinks he’s alone and walks over to the yew.  I can see him go in, towards her.  I see him pull the white band off her forehead, then her veil.  The veil drops at their feet and a river of long dark hair falls over Sister Superior’s shoulders while she throws her head back.  Then I see him put his fingers on her mouth, run them over her lips; his index finger lingers over her beauty spot.  But then suddenly he pulls away.

Sister Monica is walking past, muttering some angry sounding prayer, repeating the Hail Mary, Hail Mary, Hail Mary, pray for us sinners.  When she has gone, I see Sister Superior emerging from the yew with her veil is back on and all her glorious hair hidden.

She sees my friends.  “Hello children,” she says breathily, walking over the daisies past them, back up the hill.  Where is the soldier?

The next day I go into the chapel before class.  She’s usually in there, early mornings.  But she isn’t today.

During break, while the others play, I stand by the cedar watching out for her.  But she’s still not there.

It is now two days since we last saw her and the others have noticed.  “Where is Sister Superior?” Brenda says as we walk back to class.  None of us know.  And no-one dares ask Sister Monica who would probably bite us if we did.

I wait until Friday.  Today.  Four full days and we still haven’t seen her.  So I’m going to ask.  When everyone’s gone I follow Sister Monica down the corridor.

“Please,” I say, “excuse me, but: is Sister Superior all right?”

She turns round slowly, then takes a deep breath.   “We won’t be seeing Sister Superior any more.”

I stand staring up at her pinched face.  I don’t understand.  “Why?  Is she ill? What’s happened?” I blurt out.

“Sister Superior has left my dear.”

Sister Monica walks away.  I don’t say anything to anyone, but after the last class I go straight to the Angelus bell, grab its velvety rope and I pull and pull, ringing the Angelus Bell for Sister Superior to come back.  Please.  But she never did.