The ban in France on neonicotinoids takes effect on 1st September 2018.  Dispensations for farmers will be possible up to July 2020.  Industrial giants Bayer and Syngenta warn of economic and agricultural deadlock while there are no plausible

alternatives to the pesticide. The French Biodiversity Bill was voted in by parliament/the Assemblée Nationale on 20 July after two years of dithering between senators and deputies. Neonicotinoids are judged toxic for bees and hence our food security.  Calls have been made by the Chambers of Agriculture for more research on efficient alternatives.  The Farmers’ Union Confederation paysanne hails the decision yet deplores the idea of dispensations and says enough is still not being done to help farmers with alternatives.  Welcoming the new law 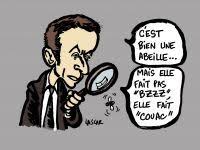 also are the Association France Nature Environnement, the Fondation Nicolas Hulot, Unaf (the French national union of bee-keepers), and the Association Agir pour l’environnement.  See more on neonicotinoids here: To Bee or not to Bee.

The decision comes within the framework of a new Biodiversity Agency to be set up in France to protect French Flora and Fauna. The Agency will officially be opened in January 2017, and will apply the Polluter Pays Principle.